Testing the HP Pavilion x360—a notebook and tablet in one 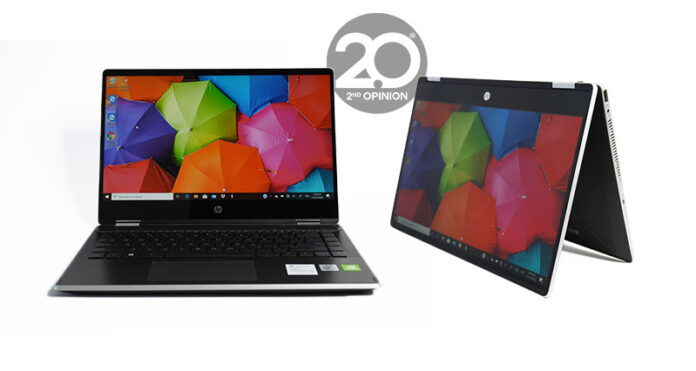 For someone like me who enjoys having two things for the price of one, convertible laptops are second to none. The HP Pavilion x360 Convertible now comes with Intel Core i7-10510U, and it might just be the right fit for our stay-at-home and work-from-home situation.

The HP Pavilion x360 comes in Natural Silver that gives it a sleek and premium look with the reflective HP logo in the middle. It has a black plastic bottom with slightly protruding rubber feet which I personally favor over thick protruding ones. Upon lifting the top, the inside has a metallic black finish, with a backlit chiclet keyboard and a decent-sized trackpad, although I wish the latter maximized the available space to the keyboard. Above the keyboard it features unique triangular Bang & Olufsen speakers.

On its sides it has a lot of ports which really comes in handy in a compact laptop. It has one SuperSpeed USB Type-C, two SuperSpeed USB Type-A, 1 headphone and microphone two-in-one jack, 1 AC smart pin, 1 HDMI 1.4, and a multi-format SD media card reader.

On its spine it has its Pavilion text and reflective hinges that are nice and tight but still enable users to open the laptop with one hand. It also has 360-degree flexibility so you can use it as a tablet, having the base behind the screen or make it into a tent-like shape using the base as a stand. It weighs 3.50 Ibs make it easy to hold around or simply to put on your lap on its tablet mode.

It features a 14-inch touchscreen with a Full HD 1920 x 1080 resolution and offers an edge-to-edge glass giving you a smooth touch throughout the screen when used as a tablet. It has thin borders on the top and sides but its bottom is a bit thick. The colors were vibrant and accurate which is useful for image editing. There was no touch-delay when using fingers to manage the screen but it would be ideal to use the HP Pen on the screen to avoid any fingerprint marks and it helps with precision when designing.

For creatives, the HP pen can also make drawing easier as the screen can sense the pressure from the pen giving a stroke a lighter or darker shade and a thinner or thick er size.

With the uniquely designed speakers by Bang & Olufsen, the audio was not as loud as I expected. The sound is clear, it wasn’t muddy, but I wish it had more power. The high-frequency sound was a little short. It can also use some extra bass to it. Folding the laptop into tablet mode, with the keyboard side as the base, the sound wasn’t muffled nor distorted which I can say was pretty impressive.

On the top bezel of the screen, it houses the front camera which was actually hard to notice because of its size. But it’s actually great, it wasn’t pixelated and it was true to the subject’s colors. It features an HDR mode and brightness was also adjustable.

The newest Pavilion x360 is powered by the Intel Core i7-10510U with an 8 GB DDR4 SDRAM, paired with NVIDIA GeForce MX250 graphics and 2GB of RAM which is an entry-level graphics card. It comes with a 1TB 5400rpm SATA HDD and 256GB PCIe SSD. We ran it on Cinebench and got 1,199 points. On Geekbench it had this score:

The 3-cell, 41Wh Li-ion battery performance wasn’t so great as it was good for only 6 hours of usage and the screen locks off already at 8%. When charging, it had a prediction of how long it will take to fully charge—from 8% it said it would take 1 hour and 40 minutes. It was actually accurate as we timed it and had the same results.

The HP Pavilion x360 is priced at P63,990 falling under the high mid-range laptops. It has a respectable processor and performance great for daily tasks. It’s premium, light and I personally really enjoy its foldable feature with its 360-degree fold and touchscreen, making it a laptop and tablet in one. All these features make it worth considering for our work-from-home and stay-at-home situation as it can easily be converted from work laptop to tablet used for entertainment anytime.

Aston Martin is celebrating the centenary of its oldest surviving car – ‘A3’ – by building a modern day tribute based on...
Read more
Load more

Accenture (NYSE: ACN) and Shiseido are establishing a joint venture to accelerate Shiseido’s digital transformation as part of the strategic partnership the...
Read more