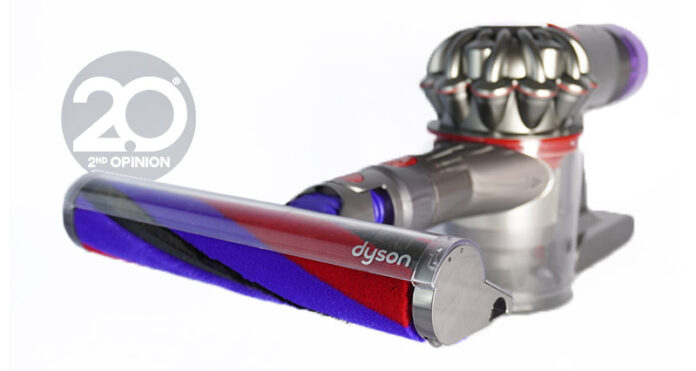 “The bigger the better”— Ever heard of this line before? This applies when how one values something is decided by how big it is—bigger food portions, gift boxes, storage space, etc. However, with Dyson, small can have the same features as the bigger versions.

The newest Dyson V8 Fluffy + was reengineered to be 40% smaller and lighter, weighing only 2.15kg. Despite its smaller size, it still comes with the expected Dyson performance with its Digital Motor V8 technology, 15 Two-Tier Radial cyclones, and high-efficiency filtration. It’s expected to deliver about 40 minutes of fade-free suction, giving you the same power from start to finish.

We’ve had the Dyson V8 Fluffy+ for more than a month now since it was launched and we’ve gotten to know it better.

Packed in the box, the Dyson V8 Fluffy + comes with six different tools that can be used on different surfaces.

On top of the vacuum cleaner weighing only 2.15kg (when most Dyson vacuum cleaners weigh 2.5-2.9kg), its main cleaner head was also reengineered to be smaller and lighter. The use of an aircraft-grade 6061 aluminum made it possible to cut the brush bar’s diameter by 29%, giving it thinner, yet stronger walls.

Dyson engineers also stitched the carbon fiber filament and felt together, which made a significant loss in weight as opposed to the previous model using glue and some plastic parts to hold the fabrics together.

This is a new tool that has two LED lights that run along both sides of the crevice tool.  It lights up dark small spaces for better visibility of where to clean. This was also very useful when vacuuming tight spaces in a car.

The wand is a tool used as an extension to easily clean the floor and high spaces. The V8 Fluffy+’s wand is 2.75-inch shorter, approximately 20% slimmer, and lighter than the previous Dyson V8 vacuum.

This can be used when you don’t have enough floor space to use the normal floor head but you want the same function. It has a rotating brush with thin bristles.

It has very light or smooth bristles to avoid any minor scratches or damages on a delicate surface (ex: ceramic, glass)

All of the tools can actually be cleaned easily but if you want to avoid using the same tools you use on the floor on your furniture (especially on your bed or couch), then the mattress tool does its job.

The V8 Fluffy+ is powered by Dyson’s Digital Motor V8. It generates up to 115 Air Watts of suction and spins up to 110,000 rpm—five times faster than a Formula One car engine. It’s also built with 2-Tier Radial design consisting of 15 cyclones to create strong centrifugal forces to fling microscopic dirt into the clear bin.

It has a six-cell lithium-ion battery that has been engineered with nickel-cobalt-aluminium chemistry. It’s expected to last up to 40 minutes of fade-free suction in Powerful suction mode, 30 minutes when used with the Motorized tool, and about 7 minutes in Max mode.

I’m glad to say that the Dyson V8 Fluffy+ did not disappoint and it stayed true to its claim of a fade-free suction which lasted us a little more than 40 minutes (44 minutes to be exact) using the mini motorized tool with the wand. On the other hand, with the same tools used on its Max mode, it lasted us a total of 8 minutes and 30 seconds. Its suction was actually pretty strong, it made it difficult to lift the vacuum from the floor. It was expected to take a total of 5 hours to fully charge but it took us only a little more than 4 hours. It would’ve been nice if it were shorter like the higher variant V11.

Just like all vacuums, it often makes a loud noise while cleaning but the Dyson V8 Fluffy+ was acoustically engineered to absorb vibrations and reduce noise levels.

There’s a limit to how much dirt it can collect that is why there’s a marker on the side of the bin as a reminder to know when it should be emptied. Luckily, it can easily eject dust and debris deep into the bin in one action— so no need to worry about getting your hands dirty.

On its back, it has a whole-machine filtration that is said to capture 99.97% of particles as small as 0.3 microns. It also has another filter on top. Both have to be cleaned at least once a month.

The Dyson V8 Fluffy+ costs P27,500, making it Dyson’s most affordable cordless vacuum cleaner with the same power and performance. With its smaller size and lighter weight, it wasn’t very tiring to grip and carry continuously, especially if you’re vacuuming the wall or a high surface. The battery life and charging time could be better, but it’s not really a big issue since it’s not like a smartphone you use the entire day, and we seldom use a vacuum for 40 minutes straight.

With everyone’s situation staying and working from home, the Dyson V8 Fluffy+ makes it easier to clean up and it saves a lot of time and effort. It’s seldom you see such high performance in a small lightweight product. The Dyson V8 Fluffy+ is a rare exception.