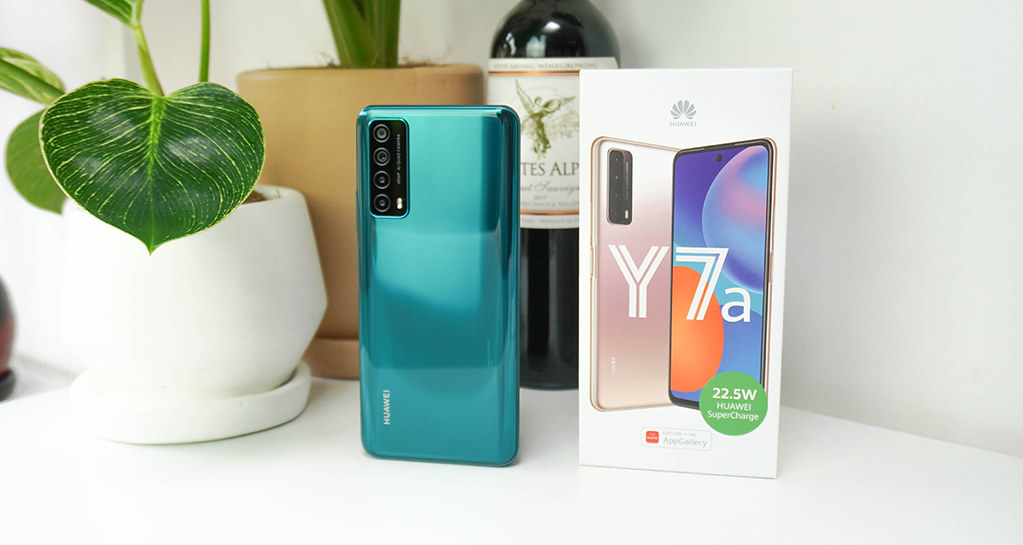 Huawei has just recently released their latest smartphone, the Y7a. It’s perfectly made for those in Generation Z and those who aim to “BE BOLD, BE LOUD and BE REAL”, Huawei’s motto for this series. The Y7a features a great quad-camera, good overall performance and affordability. Priced at only P8,999, this smartphone is designed to be an all-day smart companion and consequently has a lot of exciting things to offer.

In line with Huawei’s vision to be bold and to be loud, the Y7a comes in three distinct colors: Crush Green, Blush Gold and Midnight Black. Huawei’s aim to push the boundaries technologically while still staying true to its fashion-forward aesthetic is what led to the Y7a’s simple yet stylistic design.

The backside of the phone has a clean look with just the quad-camera aligned vertically at the top left and the Huawei logo just beneath it. All the phone’s buttons are situated on the right side, where you’ll find the volume control and power button which doubles as a side-mounted fingerprint scanner.

Even at first glance, you can immediately recognize the Y7a’s relatively large size and vast screen. With a 6.67-inch FHD+ display, 2400 x 1080 resolution and a 90.3% screen-to-body ratio, this smartphone is on the larger spectrum which, of course, has its pros and cons depending on the user’s preference. I personally enjoy large displays when watching YouTube, streaming on Netflix or playing games, and hence found the Y7a’s size very convenient. Its visual quality is good as well, but its massive screen is definitely its strongest aspect in terms of the display. Given its large size, the Y7a is also slightly heavy; despite this, it feels sleek when in hand and in pocket.

A Kirin 710A with 4GB LPDDR4x processor is what powers the Y7a to run smoothly. Despite multiple windows and/or apps used simultaneously, I didn’t experience much lag or slowing down. With the display size that it boasts, the utilization of split-screen and multiple apps open at once is especially easier and more enjoyable.

Given that this smartphone is catered to the youth, expect it to be used heavily and with multiple apps in operation at once, such as hour-long gaming sessions and extensive browsing through social media. Fortunately for them, the Kirin 710A processor can support such activities easily.

Even with heavy usage, the Y7a’s battery didn’t drain particularly quickly. At 5000mAh, it has a relatively large battery capacity which, once again, is a good characteristic for a smartphone expected to be in constant use. The only drawback I experienced was that I found it a bit slow to recharge. Thankfully, the Y7a also features an AI Power Saving technology that provides 8 optimization solutions to automatically address abnormal battery consumption.

The Y7a possesses 128GB of storage which should be sufficient for those who are heavy gamers, have a lot of photos and videos, and those who like to stream videos on-the-go. If its initial 128GB storage isn’t enough, the Y7a also allows up to 512GB of external storage.

Regarding its security biometrics, both the Y7a’s fingerprint scanning and face recognition were responsive and quick. Among the two however, I found the former more reliable.

One of the main strong points of the Y7a is its quad-camera, which includes a 48MP main camera, 8MP wide-angle camera, 2MP macro camera and a 2MP depth camera. Its main camera, which has a 0.5-inch sensor and an f/1.8 aperture to increase light intake for better image quality is great for all-around use. I particularly had fun using the macro camera, experimenting on taking close-up photos and seeing the subject’s fine details captured.

Included in the camera’s features are portrait mode, night mode, panorama, time-lapse and slow-mo, to name a few. Whether capturing grand sceneries, taking videos of your pets or taking portraits of your friends, the Y7a has more than enough camera features to suit your every need, as well as the quality good enough to truly capture those moments.

Aside from its quad-camera, the Y7a has an 8MP punch-hole selfie camera which honestly isn’t as impressive as the other aforementioned cameras, but still has its qualities. In dim lighting, the camera is still able to identify the subject and brighten up the picture. It also features AI beauty for added edits and effects for those selfie enthusiasts. Although the front camera is very serviceable, it still lacks in color vibrancy and overall quality. Hopefully for the user, the Y7a’s multifaceted quad-camera can make up for the selfie camera’s shortcomings.

In total, the Y7a embodies what a youth-oriented phone should be: capability to withstand heavy and prolonged usage, great display size, an array of camera features and large battery capacity. The Y7a doesn’t necessarily do one thing in particular greatly, but it can do multiple things quite well which, especially at its price-point and for its Gen Z target market, is a pretty solid deal and package.

Previous articleExplore endless apps with Huawei’s AppGallery and Petal Search Widget on the new Y7a
Next articleWill Apple close the doors of its ecosystem?