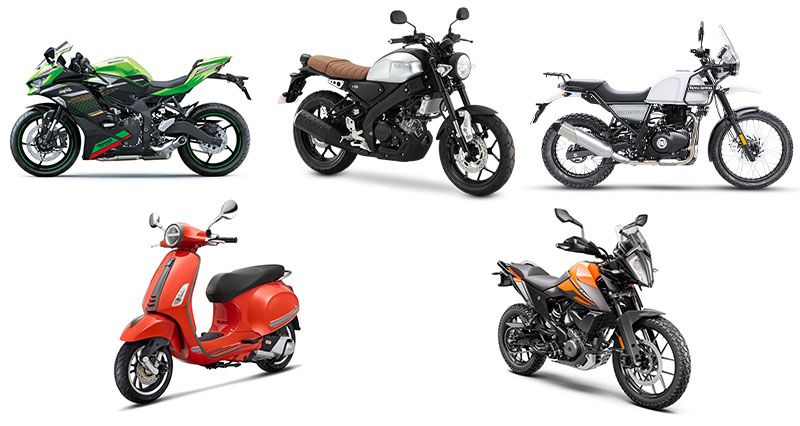 Motorbike enthusiasts naturally want the biggest, fastest bike they can afford. If you’re going for a sport bike, you’ll naturally aspire for a liter bike like the fabulous Yamaha R1. Going dual-sport? A Ducati Multistrada is everyone’s dream. Cruiser heads will tell you to skip the Harley Davidson Street 750 and go straight for a Softail.

But bigger isn’t always better. Bigger bikes are obviously pricier, but they’re also more expensive to own and maintain, their fuel efficiency can be surprisingly mediocre, and they can be more than a handful on narrow roads and city traffic. One could argue that midsize and liter bikes only really benefit the rider when the day calls for many miles on the expressway or a racetrack, where you can really enjoy their superior power.

Yet there’s more to riding than highways and track days. There are leisurely “coffee rides,” daily commutes, and occasional forays on unexplored side roads and gravel; most of which can be enjoyed on a smaller, more nimble machine. With literally dozens of small bikes on the market today, here’s a shortlist of some of the more standout choices.

The custom café racer/scrambler market is thriving in the Philippines, where shops like Iron Macchina Ph and Tokwa Party Garage can turn a pedestrian, run-of-the-mill Honda TMX into an affordable scrambler. Tapping into this vibe, Yamaha have just launched the XSR155, a retro-themed bike that looks like a smaller XSR700/900 for buyers who want the faux vintage style without having to go the custom route. Modern touches include an upside down fork, slipper clutch, and LCD instrument pod. A neat little bike for the daily commute and occasional forays into the hills or a splendid base bike for further customization.

Scooters are very practical commuters, but nobody buys a Vespa to save a ton of money compared to, say, a Yamaha NMax. With its premium pricing, Vespas are aspirational scooters that are as much about the lifestyle as they are about getting around town in a jiffy. The Primavera’s 150cc, 3-valve motor will putt-putt all the way to a top speed just a little over the highway speed limit (but you can’t take it there, of course). It will also sip fuel to the tune of 42 km/l. With a bevy of eye-catching colors to choose from, as well as a nice collection of upgrades such as luggage racks and windscreens, the little Primavera will standout in the motorcycle parking lot. Oh, and the limited edition Sean Wotherspoon is a beauty.

Adventure bikes are highly capable machines built for crunching the miles and over various terrain, but they can also be very expensive. Not so the Himalayan. Its 411cc single-cylinder engine won’t win any drag races, but it will comfortably cruise on the highway and is designed to give you lots of torque down low for exploring off the beaten track. It’s also quite narrow and light for an adventure bike, making it easier to handle on technical terrain. Apart from ABS, it doesn’t have any fancy ride modes or other tech like the big bikes, but it also costs a fraction of what you’d normally spend, saving you more money for panniers, top boxes, and lights. And while no one wants to scratch his bike, you won’t feel too bad about if you drop it on a muddy trail.

For the speed junkie who longs for a modern, lightweight supersport that isn’t all about top speed, Kawasaki have just launched the ZX-25R. Probably the most expensive 250cc motorcycle in the market today, the newly launched Kawi’s claim to fame is its screaming inline-4 motor. Making as high as 51ps at 15,500 rpm, it harkens back to the 90s when small displacement sport bikes were a thing. With a quickshifter, track-ready suspension, powerful brakes, traction control, ride modes, and whatnot, the ZX-25 is a lightweight race bike you can really thrash on the track and at speeds short of intensely crazy (and frightening) like you’d experience on a bigger, faster, and far pricier liter bike.

Proudly manufactured in the Philippines under the Ayala group of companies, the 390 Adventure by Austrian brand KTM bristles with features normally reserved for higher-end bikes. Like the popular Duke 390 street bike, the Adventure uses a punchy, single cylinder motor rated at 43hp and 37Nm of torque. It uses a lightweight steel trellis frame with fully adjustable front and rear WP suspension. Electronic aids include traction control and ride-selectable ABS. With a TFT instrument panel and smartphone integration included, it’s a tech-savvy deal that’s tough to beat at the price.  You’ll have to get in line for this one, because demand for this plucky little adventure bike is high.