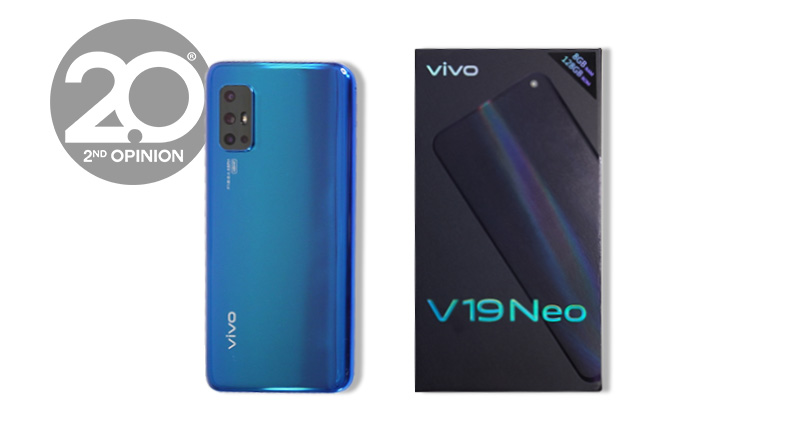 vivo Philippines recently launched their newest midrange smartphone, the V19 Neo. This sports a 6.44” Super AMOLED screen, a 48MP quad rear camera, and a punch-hole 32MP front camera. It’s powered by the same processor of the vivo V17 Pro, Qualcomm Snapdragon 675 AIE octa-core processor with a 4,500mAh battery. Should this smartphone be your next buy?

Find out in our review.

The v19 Neo comes in two color variants—Crystal White and Admiral Blue. It has a luxurious feel even with its simple polycarbonate back, and a glossy but smudge-magnet finish. Luckily, it comes with a clear jelly case to avoid fingerprint marks on the phone without masking the colors and glossy finish.

On the right it has the volume rocker and button, while on the left it has the card tray for two nano-SIM cards and Micro SD. On the bottom, it has the headphone jack, microphone, USB Type-C port, and speaker. It also has a concave shape on the top and bottom, making it easier to grip and preventing fingers from completely blocking the speaker. The speaker’s loudness is enough for a medium sized-room at 60-80% volume. On its max level, it tends to distort when playing rock and metal music.

Up front, we have a 6.44” Super AMOLED Ultra O Screen with an FHD+ resolution of 2400×1080. It has a 91.38% screen-to-body ratio with thin notches on its sides. However, it only has a conventional 60Hz refresh rate–not exactly a downgrade but most of its competitors feature more. Its screen also houses an In-Display Fingerprint scanner placed perfectly on the bottom of the screen just like the other models of the V Series. It unlocks the phone quickly without any issues.

On the back, it has the protruding 48MP AI quad rear camera. 8MP wide-angle, and 2MP for the macro and depth lens. It’s actually a bit too bulky that makes it wobble on its back. The photos showed very good quality and contrast with favorable lighting.Shooting on night mode with the wide-angle lens produced photos that were just right; not too bright, nor noisy.

The punch hole 32MP camera has a wider angle and was enough to capture all the details but it can be a bit too bright or over-exposed.

The V19 Neo features a 2-year old processor–the Snapdragon 675 AIE–with 8GB RAM and 128GB storage. This is similar to the V15 Pro and V17 Pro. It’s generally smooth for day-to-day tasks, multi-tasking, and launching apps. It also has an Adreno 612 GPU. You may expect a slower response rate playing games at its highest graphic setting such as the processor-intensive Asphalt 9. The V19 Neo also has an Ultra Game Mode to block messages and alerts to fully concentrate on your game. There were no heating issues too after playing for 3 consecutive hours.

It has a 4,500mAh battery with an 18W Dual-Engine Fast Charging which took us an hour and 40 minutes to fully charge from 0-100. It lasted us a total of 50 hours with my daily routine playing from time to time and using it for socials.

It’s not exactly the star of the show compared to its competitors with almost the same features— mostly because of its price point. It’s also quite similar to the features of the Vivo V17 Pro, it has the same processor and camera resolution. The V19 Neo is priced a bit cheaper. Although the super  AMOLED screen is definitely flagship phone quality.