Home IMO The Super Standouts: The 6 Best Superhero Movies from the Last 6...
FeaturedIMO 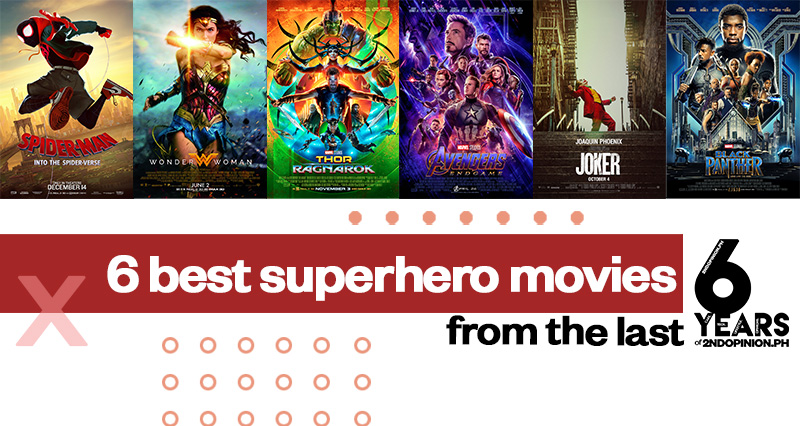 The superhero movie genre exploded in the last couple of years. Gone are the days when we would see the likes of Batman or Spider-Man once every two or three years. Now, Hollywood produces a handful of comic book films in regular fashion.

With so much superhero content being churned, one has to wonder whether the interest in the superpowered genre will eventually wane. Nothing lasts forever.

So as we wait for the inevitable, it is instructive to remember the best that the genre has to offer. Shown below are the top-notch superhero movies released from 2014 to 2020.

It is not a mistake that one of the best superhero films in the last six years was not in live action format. Spider-Man: Into the Spider-Verse, while computer animated, can hold its own against the competition. Quite the claim, but such a postulate does have grounds.

First, you not only get one Spider-Man but a whole bunch of Wall Crawlers. Second, Spider-Verse has a banging soundtrack. Third, the movie, compared with its live action counterparts, had more heart. Spider-Verse’s message of believing in oneself resonates especially to those that have entertained doubts about themselves.

Next on the list was a godsend; it is DC Films’ unexpected savior. Wonder Woman came at a time when DC needed to prove its relevance while its rival, Marvel Studios, has lorded it over the box office.

So, how did WW pull it off? The movie owes its success to its director Patty Jenkins. Instead of showing Wonder Woman as a typical superhero, Jenkins made the Amazonian princess a beacon of hope and love.  That angle touched a chord in people’s hearts — especially now that so much hate permeates in the world.

Now if Spider-Verse and Wonder Woman focused on serious themes, the next one on the enumeration revels in goofiness. Thor: Ragnarok does not take itself seriously, and that’s what makes it special.

Credit goes to Ragnarok director Taika Waititi for accomplishing this. He veered away from the Thunder God’s mythological persona — which in the long run was more of a bane than a boon. After all, who could relate to a deity?

So Waititi instead placed the Mjolnir-wielding hero in a space odyssey. He also made the Thunder god funny. For the first time, Thor became relatable.

Coming in third is a film that goes all out. The sheer scale alone will blow your mind away, i.e., an army of superpowered beings facing off against a horde led by an intergalactic tyrant. The battle at the end, as big as the big skirmish in Lord of The Rings: Two Towers, will make any comic book afficionado, especially those immersed in Marvel lore, wet their pants.

But if there is one thing that makes Avengers: Endgame standout is this: it acts as the culminating film for phases 1 to 3 of the Marvel Cinematic Universe. That’s no small feat since the MCU is comprised of 23 films that span a decade.

Now, if Avengers: Endgame attempted to provide the ultimate popcorn flick, let’s look at a comic book film that does the opposite. This one is as heavy as it gets.

In Joker, we see Arthur Fleck bludgeoned by hopelessness, fear, evil, and despair. All the pummeling pushes him off the edge. He lashes out. He maims and kills without any reason. He releases the craziness within with a force akin to a hurricane being let loose for the first time.

Amid the violence, what does the Joker aim to teach?

We never know how many Jokers we create every day.

The film that takes the top spot provides more than an escape. It is considered as the best superhero movie in recent memory for becoming culturally relevant.

So, if Mad Max: Fury Road (2015) has morphed into the film that represents the Me Too movement, Black Panther is the motion picture that espouses the Black Lives Matter cause. Because Black Panther does not mince words. It says discrimination persists. That’s one heck of a statement for a superhero movie.

Korean dramas, or K-dramas, continue to capture the fascination of Filipino viewers. Especially during the quarantine, it has become a staple source...
Read more
Load more

Building on the success of its recently introduced Wellness app and new golf features, the TAG Heuer Connected is once again expanding...
Read more
Automotive

Mitsubishi has recently introduced to the Philippines the electrifying Outlander PHEV, which happens to be the bestselling Plug-In Hybrid SUV globally. With...
Read more
Features

Grab Tech Insider: How to build businesses with Grab

Nong, like many other everyday entrepreneurs, has big dreams to scale her business. But with a space that sits only 10 people...
Read more
Features

Google has launched the “Get The Facts” campaign as part of its ongoing commitment to helping build public trust in vaccines by...
Read more

The 296 GTB, the latest evolution of Maranello’s mid-rear-engined two-seater berlinetta, was premiered today during an online event broadcast on Ferrari’s social...
Read more