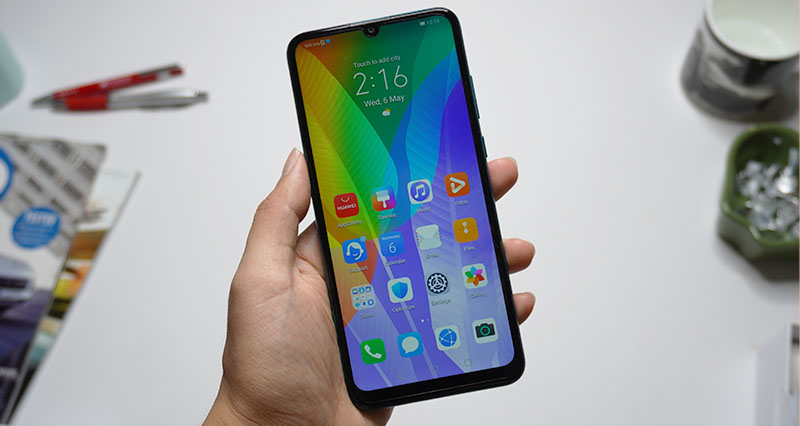 Huawei has finally launched another entry-level smartphone, the Huawei Y6P. Priced at PHP5,990, it comes with a 13MP Triple Rear Camera, an 88db speaker which supports Huawei SuperSound and a 5,000mAh battery in a beautifully designed compact body. Can this new budget smart phone satisfy its users with its features and the new App Gallery? Find out in our review.

The Huawei Y6P comes in three brilliant colors, namely, Midnight Black, Phantom Purple, and Emerald Green which we have. All variants have an upscale-looking plastic back which has a shiny wavy S-shaped texture when hit the by light. It can easily be held because of its compact body with dimensions of 159.07mm x 74.06mm x 9.04mm and a weight of 185g. You’ll also find the rear fingerprint scanner which was placed perfectly and I didn’t have any problems with.

On the right side of the phone, you have your volume rocker and power button. This leaves the card tray for two nano SIM cards and a micro SD slot on the left, like most Huawei phones. This might take some getting used to if you’re used to having the volume buttons on the left. On the bottom we have 3.5mm headphone jack, microphone, microUSB, and speaker. You’ll also find another microphone on the top of the phone.

The speaker supports Huawei SuperSound giving it 88db, making it one of the loudest phones. The sound quality was good and impressive when used in max volume because the music wasn’t as distorted as I expected. It was good enough to use outside to relax or if  you want to workout.

Aside from the brilliant finish, the back also houses a 13MP Triple Camera with an aperture of f/1.8, 5MP Wide Angle Camera with a 120° angle, and 2MP Depth Camera with a f/2.4 aperture. The colors were good, it wasn’t too saturated nor too sharp with favorable lighting. It wasn’t bad too when taking photos at night despite not having night mode. The aperture mode or portrait mode was okay too, the subject didn’t have any harsh separation from its background.

For the Selfie Camera, we have an 8MP which is housed in the dewdrop notch on the top of the screen. You also have beauty mode which automatically removes blemishes. There were some photos I took and I was shown a warning “sharpening… please steady your device” which was odd because the phone was stable when I was taking photos.

For the video which supports 1080p at 30fps, the colors were faithful to the actual subject, so what you can see with your naked eye is what you’ll get on video. Overall, with this price point, I have no complaints. Comparing it also with other cameras, this one is flush with the phone’s surface unlike most phones whose cameras protrude at the back

It operates with EMUI which is based on Android 10. It has MediaTek Helio P22 octa-core with up to 2.0GHz with the Cortex-A53 and the GPU PowerVR GE832 with up to 650MHz. It’s actually perfect for your day-to-day mobile phone tasks. With gaming, I was able to download Asphalt 9 which I got from the AppGallery. I experienced some frame drops right after downloading the app and playing with it right away with the highest graphic setting. However, after two or three games, performance improved and didn’t experience any screen lag or stutter.

After using the phone for more than an hour just playing games, the phone heated up a bit but not to an extent that it was uncomfortable to hold. I also enjoyed the different screen modes I can work around with depending on how I use my phone—Dark mode, eBook mode and Eye Comfort. All these screen modes are for the 6.3” HD screen with a resolution of 1600×720.

You can enjoy all these features with the power of a 5,000mAh battery. It doesn’t support flash charging though and took more than 2 hours to full charge. It also lasted me three days with light to moderate usage, at an average of 50-70% brightness.

To further enjoy your Huawei Y6P, you have the Huawei AppGallery where you can get most of the apps you need like Facebook, Tiktok, Viber and Snapchat. For your daily news, you can download the GMA app. You can also enjoy your financing, banking gaming and a lot of other apps. It also has an App Rewards system that gives out special points, app vouchers, gift packs, and other incentives.

On top of all the apps you can get from this platform, you can also rely on the safe and secure downloads you make. Huawei claims to have four-layer detection security and ensures all user data is contained within the device. It has a strict security detention which can detect any malicious behavior and security vulnerability.

If there are other apps that you wish to download, you can easily download them through third party apps.

Remember when gaming used to be a rather expensive hobby? Now, every other person seems to either be playing online multiplayer games,...
Read more
Automotive

Nissan dares the impossible with the Nissan LEAF at the 8th Philippine Electric Vehicle...

In line with its commitment to bring innovation that excites to the market, Nissan in the Philippines will be participating in the...
Read more
Load more

Remember when gaming used to be a rather expensive hobby? Now, every other person seems to either be playing online multiplayer games,...
Read more
News

Having been indoors for the past several months has definitely protected us from the dangers of the outside world in terms of...
Read more

Leading global tech brand OPPO celebrates its 16th anniversary, marking a milestone in the company’s constant technological innovation and growth. Over the past...
Read more