The all-new Hyundai Tucson is sharp from all angles 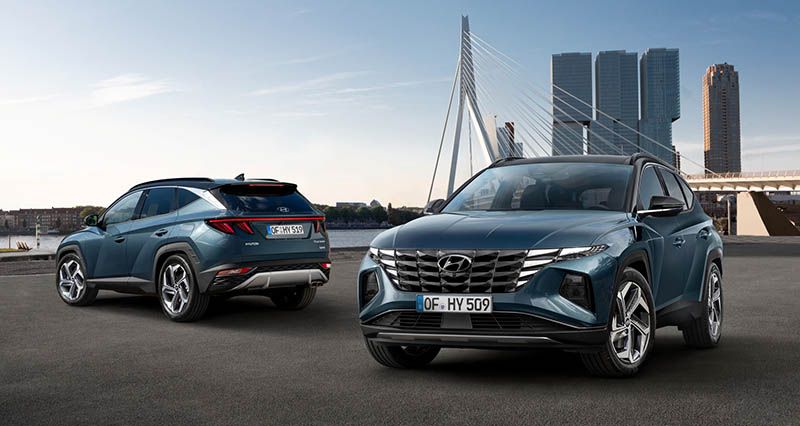 Hyundai just unveiled the all-new Tucson in Germany and it stands out in more ways than one. They implemented a new design highlighted by the grille and headlights, better safety features and even hybrid options for those who want to get more while helping save the environment.

They took away the gentle curves and sloping lines that Hyundai is known for and its place is a totally revolutionary aesthetic. Hyundai calls it “Sensous Sportiness” which seems to be the new design direction for their cars moving forward. “The mission of ‘Sensuous Sportiness’ is to elevate the emotional qualities of automotive design. We want our customers to feel moved. With the all-new Tucson, we are introducing its ultimate evolution and a definitive statement about Hyundai’s unstoppable forward momentum,” said SangYup Lee, Senior Vice President and Head of Hyundai Global Design Center.

The design culminates upfront with the ‘Parametric Jewel’ grille design that also houses the Daytime Running Lights making it seem like a part of it. When off, the entire grille is colored in dark chrome.

At the back, twin LED taillight ‘fangs’ are connected by an LED strip, finished off with the geometry inspired aesthetic of the all-new Tucson. The wiper is also hidden under the rear spoiler giving it a more pleasing view that’s unique in its class.

Inside, it features a holistic design they say was inspired by waterfalls, that will catch your attention and will lead you around the interior. This free-flowing design was made by having a ridge that runs from the front door panel to the dash seamlessly. They also got rid of the traditional gauge cluster housing in order to keep the aesthetic clean, and replaced it with a flat 10.25-inch open cluster while implementing a big 10.25-inch touchscreen that has Apple CarPlay and Android Auto at the center of the dash. Under it is also an all-touch affair for the air conditioning, ventilation, and temp. There’s also ambient lighting so you can match the interior with your current vibe or mood.

Hyundai also modified the aircon vents with ‘Multi-Air Mode Technology’ that decentralizes air output away from the vents and into smaller slots in the dashboard. This blows cool air more gently while still maintaining the temperature you set, avoiding cold numbness in the body parts hit by the air out of the vents. Three-zone climate control is also now available so rear occupants can have control over their own temperature.

There’s also increased legroom inside, while cargo space was also boosted by 33-107 liters of space, depending on the variant, with up to 1,799 liters of space with the seats folded.

The new Tucson has an enhanced 7-airbag system that hopefully makes it to our shores. It features a ‘row center side airbag’ that separates the front passengers when deployed so they don’t hit each other in an accident.

There’s also a whole slew of safety features that puts it pretty much in its own class. However it’s dependent on how much of it makes it to the country. There are things like Forward Collision Avoidance Assist, Blind Spot Collision Warning, Surround View Monitor, and Lane Keep Assist among others.

The new Tucson has a slew of options when it comes to the engine. The hybrid version runs on a 1.6L turbo gas ‘Smartstream’ engine and a 44.2kw electric motor with a 1.49 kWh battery paired to a 6-speed automatic and available in two or four-wheel drive.

Hyundai developed a sort of hybrid manual that will make its debut with the Tucson. The Intelligent Manual Transmission operates electronically and decouples from the engine if the driver releases the gas pedal making it go in a coasting mode where the chosen gear remains selected but the engine will be turned off. If the driver presses the brake or gas pedal, it will bring the engine back to life and retain the chosen gear. If you press the gas pedal and the car recognizes there’s not enough speed, it will go into neutral instead, letting you select a lower gear.

With such touches made on the all-new Tucson, it would be an exciting waiting game trying to guess what features and powertrain options will make it in the Philippines. What’s sure though is that this one looks so good inside and out and we can’t wait to see how Hyundai implements the new design language into the other cars in the lineup.

Facebook
Twitter
Pinterest
WhatsApp
Previous articleLife’s Too Busy: Internet security yet to be a priority for 3-in-10 active online users in SEA
Next articleFitbit continues to lead the way in health and fitness — one wrist at a time

In line with its commitment to bring innovation that excites to the market, Nissan in the Philippines will be participating in the...
Read more
Automotive

From August 22 to November 22, 2020, beep users can get more out of their daily commute by earning reward points that they...
Read more
Automotive

Nissan Philippines continues to enrich Filipino lives as they express their gratitude to the medical frontliners through donating 1,100 meals.
Read more