Home Automotive Review: Lexus IS 350—The straight-A student gets an F
AutomotiveFeaturedReviews

Review: Lexus IS 350—The straight-A student gets an F 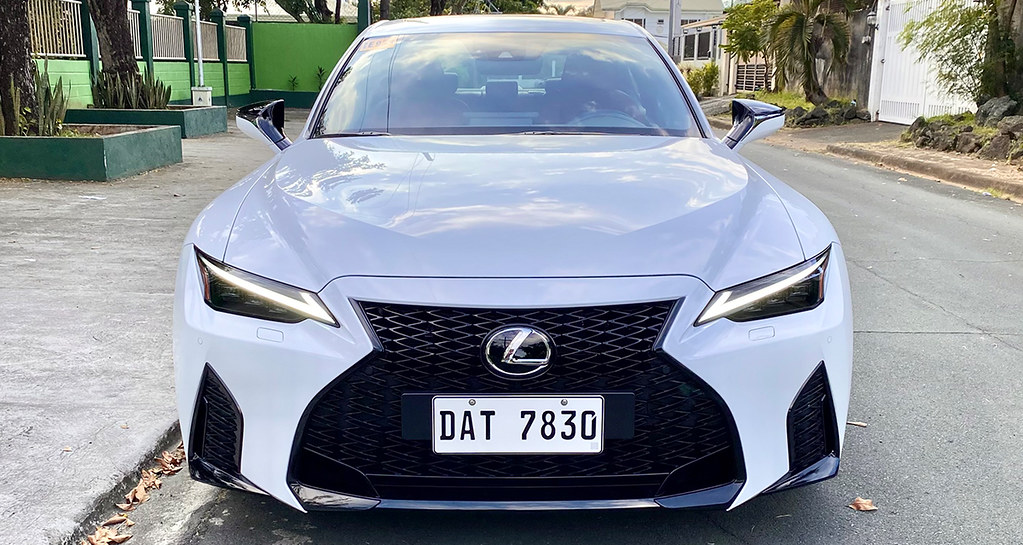 Car designers and engineers may come from the most prestigious schools in the world, but when it comes to a car’s actual driving prowess on the road, nothing is better than coming from the school of hard knocks—the racetrack.

The Lexus IS is the very first car to graduate from the brand-new Nurburgring-inspired Shimoyama test track owned by Toyota/Lexus. And its one alumnus that I give straight A’s to. Because of an “F”—proudly displayed on the car’s fenders.

Because it’s an F Sport. The sensational-looking Lexus IS 350 F Sport is the high-performance flagship of the IS range, taking the best attributes of Lexus—supreme comfort and luxury—and combining it with the Japanese brand’s own interpretation of a genuine sports sedan.

Result? A luxurious yet sporting rear-wheel drive compact sedan that coddles you when you want it but stirs your soul when you feel the urge to wring that creamy-smooth V6 to its 6,400 rpm. The transformation from a cosseting sedan to a scintillating four-door sports car is amazing. More to the point, the IS 350 F Sport, despite its razor-sharp handling, has none of the jarring suspension stiffness that afflicts many of its high-performance German competition. I was anxious when I first approached one of our village’s notoriously tall and squarish humps, expecting the bottom of the low-slung car to scrape or the expected stiff suspension to transmit a harsh landing after negotiating the hump.

Instead, the P3,808,000 IS F Sport glided over it, as if it was on a soft springs and dampers of a limo—but without the post-hump bouncing or wallowing. An owner of an uber-cushy Camry would be right at home. Which makes the IS 350 F Sport all the more amazing. Because when I had the opportunity to wring through the car through some empty curvy roads on a Sunday drive, the car behaved magnificently, effortlessly transforming into a firmly (but never harshly) suspended apex predator.

Numbers? The Lexus IS 350 F Sport has a 312hp, 380Nm naturally aspirated 3.5-liter V6 mated to an 8-speed automatic—good for a 6-second 0-100 km/h run. That’s just a hair over a second slower than a Porsche Boxster—an exceedingly accomplished sports car that’s vastly smaller, lighter, and seats only two.

Fuel consumption? The digital readout stated a range of 5 to 6 kilometers per liter in heavy Metro Manila traffic. I saw varied 8 to 10 km/l figures when traffic loosened up—about as good as you can get from a high-performance sedan that can run with genuine sports cars.

Style-wise, the latest IS is the sportiest yet—30mm wider than its predecessor and with a sleek silhouette and a wide and low stance that’s strongly reminiscent of Lexus’s sensational RC and LC coupes. Every aspect of the new IS oozes with power and purpose, from the extremely aggressive rendition of Lexus’s mesh-type spindle grille and sharply sculpted headlamps to the distinctive character lines that sweep down and forward from the rear doors to the continuous strip of red LED lighting (that tapers to mere millimeters in the center), a slim black trunklid spoiler, a prominent diffuser, and large dual tailpipes at the rear.

When you stand directly behind the car and gaze at either side, you’ll notice its curvaceous hips that are about as sexy as you can find in a Maserati or Jaguar sedan.  The new IS F Sport is fitted with staggered 19-inch multispoke wheels in a dark premium metallic finish that, again, pay homage to the RC and LC models. Keeping in contact with the road are 235/40R19 tires for the front and 265/35R19 for the rear.

The human-centric and highly intuitive cabin—typical of Japanese cars—is another highlight of the new IS. Distinctive details like accent stitching along the dash and large, circular air vents are reminiscent of jet turbines and are an homage to the iconic first-generation IS. The new touchscreen infotainment system has been enlarged and moved forward for easier operability and minimize driver distraction. Perhaps the only learning curve you’ll have to experience—especially if you’re new to Lexus or used to the scroll knobs in German luxury cars—is with the infotainment touchpad just behind the gearshift lever. A few days’ use proved adequate to acclimatize to the new interface’s operation, though.

Of course, taking center stage in the IS F Sport’s interior is the leather-lined cabin in spectacular Flare Red (the F Sport interior also comes in black or white). The center console panel is finished in Piano Black along with touch-sensitive temperature controls that can be adjusted by gliding your finger over it.

Sculpted and supremely comfortable and supportive front seats are 8-way power-adjustable with lumbar support and seat ventilation. Audiophiles are in for a treat as the IS is equipped with an immersive 10-speaker surround sound system. The F Sport model comes with a 10.3-inch Electro Multi Vision touchscreen with Apple CarPlay and Android Auto.

The new IS also comes with LSS+2—a suite of the latest Active Safety features—such as Dynamic Radar Cruise Control, Lane Tracing Assist, and Automatic High Beam. The F Sport model comes equipped with the upgraded Pre-Collision system which detects oncoming vehicles and pedestrians, even when turning left or right at intersections.

Lexus engineers and test drivers truly gave their newest IS the ultimate test in Shimoyama. And the car has graduated with flying honors—which is as expected, as the compact rear-wheel drive IS, over a million of which have been sold, has always been the “driver’s car” of the Lexus sedan lineup. Lexus has boldly stated that the new IS will set the bar in dynamic handling for all future Lexus models. It may not have invented the sports sedan, but it is certainly taking the genre to a superb and heretofore agreeably new level. And Lexus hasn’t even brought in its spectacular new IS 500 here yet!