Review: Samsung M51 – The all-around phone for less than P20k 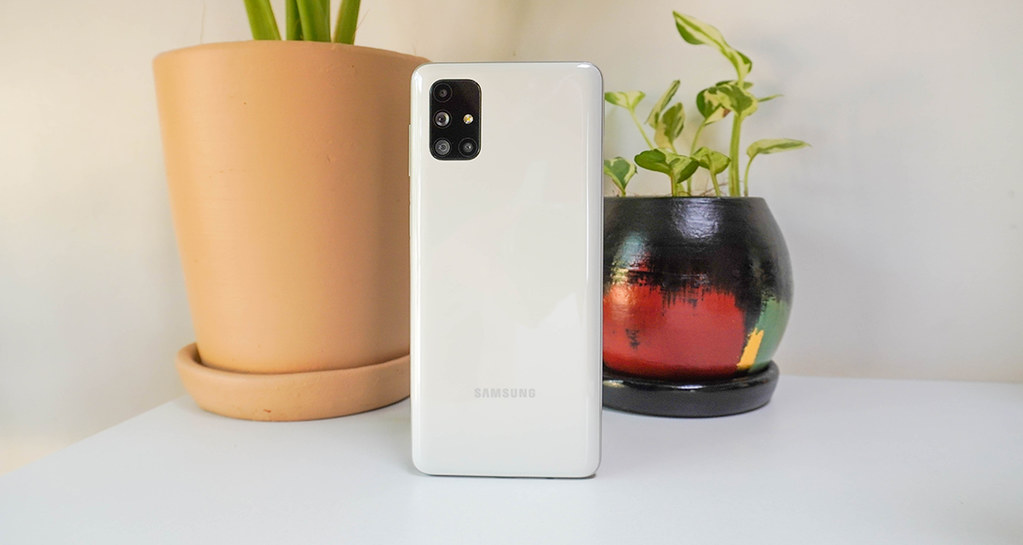 My first impressions when initially getting my hands on the new Samsung Galaxy M51 is its large rectangular shape with sharp edges and its immense screen. Its screen-to-body ratio is on the greater end of the scale as compared to similar phones, which is something quite impressive and note-worthy given its size.

The Galaxy M51 has a streamlined body that gives a nice and comfortable feel when handled. Despite being on the bigger side in terms of size, it doesn’t feel heavy nor bulky when inside your pocket thanks to its sleek and slim design. Its monotone-colored glossy backside is rather simple with just the quad-camera on the upper left corner and the Samsung logo below. All its control buttons are fixed on the right side of the phone: volume control and a power button whose biometrics for fingerprint scanning, as well as face recognition, are accurate, reliable and swift.

One thing that’s immediately noticeable with the Galaxy M51 at first glance is its large size and its screen that impressively covers practically the entire body. As compared to other models and rivaling products, the Galaxy M51 minimizes the bezels in order to maximize its 6.7” full HD+ and Super AMOLED+ display. This pairing of great screen size and great visual quality is a catalyst in allowing this smartphone to give an exciting entertainment experience for its users.

Personally when watching videos specifically on YouTube and Netflix, I prefer to watch on my TV or laptop due to better overall quality and larger size, especially compared to when using a tablet or phone. Although the Galaxy M51 isn’t a TV nor laptop, I was still able to have an immersive and comfortable experience when using it to watch videos. Moreover, playing different kinds of games such as PUBG, Call of Duty and Mobile Legends, is one way to make the most out of the vast screen, especially with the processor it possesses that can support fast-paced, highly-visual online games. The only downside in terms of an overall entertainment experience is that its speakers are of average quality and sound.

One of the Galaxy M51’s top features is its quad-camera which includes a 64MP (F1.8) main camera, a 5MP (F2.4) depth camera that can easily fine-tune and blur the background, a 12MP (F2.2) ultra wide camera that could reach angles of up to 123º, and lastly a 5MP (F2.4) macro camera that, with a natural Bokeh effect to allow your subject to standout, keeps close-ups and ultra-fine details in focus.

This device’s under-display 32MP front camera’s quality is good and decent, but definitely not as impressive nor to the degree of the aforementioned quad-camera. Additional modes and effects include panorama, food mode, night mode, slow mo and hyperlapse, among others.

I greatly enjoyed utilizing and experimenting with these impressive features during various day-to-day activities. Whether taking a stroll around the village, going on a grocery run, exercising outdoors, grabbing some coffee and hopefully soon, meeting up with family and friends, the Galaxy M51 has more than enough cameras and functions to not only capture these moments, but to take quality snapshots as well.

The Galaxy M51 is powered by an advanced Octa-core processor with up to 8GB of ram for both an efficient as well as smooth performance. Its internal storage has a capacity of 128GB, which is of average size compared to other products in its price point, but an additional 512GB in its microSD card slot is also available, something that not all other products may have.

The 7000mAh battery capacity that the Galaxy M51 is equipped with is large enough for any phone user to greatly appreciate. Given how a lot of our daily activities— be it for work, school, and leisure —are nowadays done through our mobile devices, it is essential for our phone’s to possess a battery with the capacity to support and withstand these various tasks. The Galaxy M51’s battery is paired with a 25W Fast Charge, allowing the phone to recover to full capacity at a relatively quick pace given the battery size.

All in all, the Galaxy M51 is a great all-around phone mainly due to its large display with great visual quality, impressive battery capacity and multiple camera features, all engined by a powerful Octa-core processor. Priced at P19,990, the Galaxy M51 is the quality phone at an affordable price that you’ve been looking for.