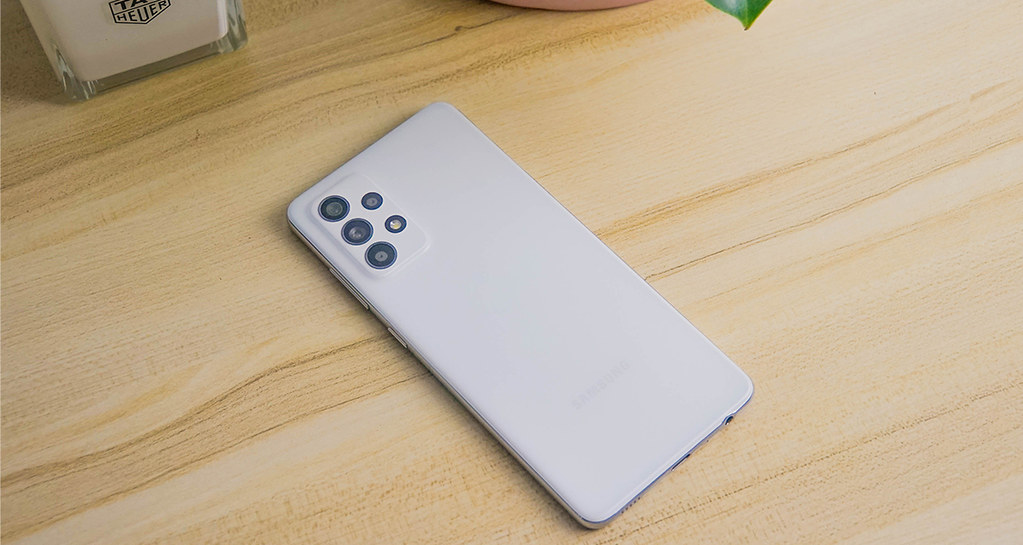 Here we have the Samsung A52 — one of Samsung’s latest addition to the Galaxy A Series for less than PHP20k. This packs a few upgraded features from its predecessor but is it worth getting? Keep reading to find out.

Giving off a rectangular look due to its fairly sharp corners, the A52’s rear has a matte finish, although doesn’t necessarily give off that sleek feel that’s brought about by phones of similar design.

One aspect that Samsung noted regarding this phone is that its camera housing is very minimal, allowing for a pretty flat rear with the cameras barely protruding, hence a near unibody appearance.

The volume control and power buttons, which are the A52’s only ones, are both located at the right side. At the bottom of the phone is where you’ll find its Type C charging port, audio jack and speaker.

With an FHD+ Super AMOLED, 6.5-inch Infinity-O display, the Samsung A52 can not only offer ample screen size, but more than decent visual quality as well. Both its punch-hole type front camera and very slim bezels allow for the maximization of the display.

One aspect that some may overlook is that its display can reach up to 800nits of brightness. For most, this means brighter and clearer display. For me, this means being able to see my screen very well when playing golf on the fairway, as the combination of the beaming sunlight and wearing shades requires a vibrant screen for it to be seen well.

Ironically, staring at bright screens for a long time and/or when the surrounding area is dim, my eyes tend to strain. Fortunately, the A52 also comes with Eye Comfort Shield that lowers blue light to reduce discomfort.

The A52 houses multiple cameras which, I believe, is one of its better qualities and can definitely hold its own against other phones in this regard. Consisting of a 64MP main camera, a 12MP ultra-wide camera that can reach angles of up to 123°, a 5MP macro camera that allows your subject to stand out through a natural bokeh effect with ultra fine details, and another 5MP depth camera to help fine tuning the background, Samsung equipped the A52 with an impressive camera for its price point. Rounding out the cameras would be a 32MP selfie camera.

What makes the camera better and more useful are the various features that allow it to perform better. OIS, or “Optical Image Stabilization”, allows for more light to be included when needed, resulting in crisper detailed photos, while Super Steady Mode keeps your shots stable with the utilization of the Ultra Wide camera and predictive software.

There are also a number of different modes and features to use and playaround with, such as AR doodle, panorama, food, night, portrait, slow-mo and hyperlapse. The pairing of a good camera with many features makes the A52 that much more exciting, especially for those who enjoy taking pictures, such as myself.

At 4500mAh, the A52 has a respectable battery capacity that is more than capable of withstanding what it is expected to go through. However, at its price point, I believe that there could have been a battery that is slightly bigger.

The A52’s battery consumption relative to phone activity was fairly average; even multitasking with several apps open didn’t seem to drain an alarming amount of energy.

Although I believe that its 4500mAh capacity can be beefed up a bit more, its 25W Super Fast Charging is a good compliment to have. In 30 minutes of charging time, the A52 was able to replenish under 50% of its total capacity. At that pace, draining your battery and fully recharging shouldn’t be too much of a worry.

An advanced octa-core processor with up to 8GB RAM is at the heart of the device, along with 256GB and 1TB of internal and external storage, respectively. These aren’t necessarily eye-popping specs, especially given its Samsung branding. However, given its mid-range price point and overall performance, I believe its processor is satisfactory.

As someone who likes his interface clean and tidy, I was frankly a bit bothered by the number of pre-installed apps scattered around the menu that I would very seldom, or perhaps never, use. Thankfully, its One UI makes it easier and fun to personalize and customize the general layout and interface to fully appreciate the Galaxy experience.

One feature that the A52 boasts that a number of other phones can’t is its IP67 rating for water and dust resistance. This roughly translates to withstanding depths of up to 1 meter of water in 30 minutes. The usefulness of this aspect may differ from user to user, but for someone who is both adventurous and clumsy, this characteristic is greatly appreciated.

Other features include Game Booster to maximize your gaming performance by minimizing distractions and learning usage patterns to fully optimize battery and memory, as well as Frame Booster that allows for smoother, life-like motion graphics.

As previously mentioned, the A52 only has a total of 2 buttons on its sides for power and volume control. So, does that mean it doesn’t have any fingerprint sensor? Well, that’s what I initially thought.

Its fingerprint sensor is actually situated on-screen, centered at the lower half of the A52. The sensor subtly appears when pressing on the power button or simply tapping the screen, but can still detect your finger and be used when the screen is locked and the sensor goes invisible.

Additionally, integrated in the phone is Samsung Pass biometric authentication that facilitates both a faster and safer overall experience for online payment. This would particularly be of great added safety, especially given the increasing number of frauds and modus operandi during these desperate times.

With an above par screen quality, good battery capacity and the general Samsung Galaxy experience, the P18,990 price tag seems quite reasonable to me. Coming off the success of its predecessor, the Galaxy A51, I could definitely see the A52 following suit.

Facebook
Twitter
Pinterest
WhatsApp
Previous articlePLDT & Smart link with IWF to rachet up global fight against online child abuse
Next articleGet a chance to win an ASUS VivoBook Flip 14 on May 06, 2021!

The global pandemic has pushed industries to shift their operations digitally to better cater to their customers' changing needs. For instance, banking...
Read more
News