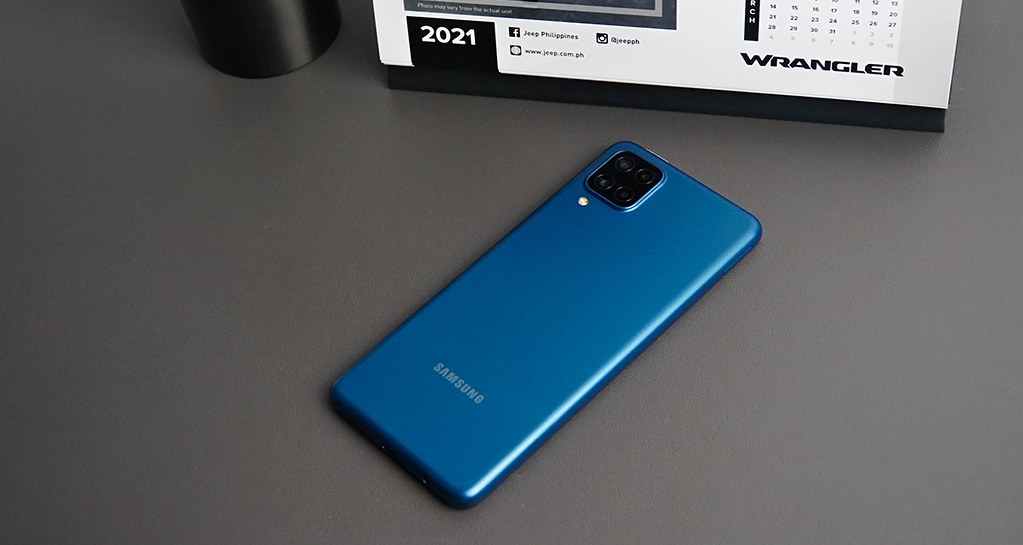 Samsung’s Galaxy A12 possesses certain features that make it quite an interesting smartphone. On the one hand, it fits the entry-level category with its budget-friendly P9,990 price tag and yet on the other hand, you get the Samsung Galaxy experience. Although not necessarily equipped with the most eye-popping or top-of-the-line features that some if its fellow Galaxy smartphones may have, the A12 is still more than capable of holding its own.

In terms of design, the A12 definitely fits rights in with the Galaxy family with its tall, sharp-curved appearance. It combines a streamlined design aesthetic with classic colors, coming in variants of black, white, red or blue. Refined curves are also present for better handling, comfort, as well as screen navigation.

Its back cover is plastic, which is something I wouldn’t be too concerned about at its price point. Its two-tone cover mainly consists of a pattern that gives off a rigid yet secure feel when held, which is something I took note of as bigger and heavier phones are most prone to being dropped, at least for me.

One of the Galaxy A12’s strongpoints is its large 6.5-inch Infinity-V Display with a 720×1600 HD+ resolution that allows for sharp, crisp and clear detail. For Samsung, more display means more room to play, which is evident in how its large display allows for an immersive experience in various aspects, such as when online gaming or streaming. Despite having noticeable bezels (especially at the top and bottom of the screen) and a punch-hole type selfie camera, its large size is retained and isn’t compromised.

Its chipset that combines an Octa-core 2.3GHz processing power with up to 6GB of RAM for fast and efficient performance is more than satisfactory to me in terms of performance within its price range. Extensive usage combined with numerous apps running simultaneously didn’t seem to faze the Galaxy A12 as I only noted minimal signs of slowing down and/or lag.

There weren’t many problems encountered in terms of its performance; the only minor problem I came across was that there would sometimes be 5 to 10 minute spurts where the phone was connected to my WiFi but couldn’t connect to the internet (even if my other devices worked fine). This only happened a handful of times when I first started using it, but it seems as if it were only a minor bug to begin with and has hopefully passed.

Similar to a number of current smartphones of different kinds, the Galaxy A12 has a multi-role quad camera. Although having a quad camera might seem commonplace, its quality, in terms of as a whole and with each individual camera, still differs nonetheless. I honestly didn’t have much expectations in regard to the camera’s quality as you’re never truly sure what quite to expect when it comes to an entry-level phone, but the Galaxy A12 has a fairly good camera.

Consisting of a 2MP macro camera that applies a natural Bokeh effect, a 5mp ultra-wide camera that reaches up to 123º, a 2MP depth camera that adjusts depth field to fine-tune the background blur behind the subject, and a 48MP main camera, the Galaxy A12’s quad camera is a respectable one with a number of different features to enjoy and play around with. Rounding out its camera would a 12MP selfie camera that has live focus to show more you and less of the surroundings.

One minor feature that I appreciated was that when taking photos, there’s a movable “click” button you can adjust anywhere on screen that is most convenient for you. Given that this particular smartphone is on the larger and heavier side, this was of great assistance, especially for someone who enjoys taking photos.

With a capacity at 5,000mAh, the Galaxy A12 has a battery big enough to withstand relatively long and extensive use. Adaptive Fast Charging at a rate of 15W is also a plus, considering that bigger batteries generally take a longer time to fully charge. You can possibly attribute the large battery to be the reason behind the Galaxy A12 being a bit on the heavier side, but I personally wouldn’t mind if it means more battery life.

To me, the Galaxy A12’s title of being an entry-level Samsung smartphone is what perfectly encapsulates what to expect from it: not necessarily as formidable as fellow Galaxy phones but you still know, more or less, what you’d be getting out of such type of phone. In short, the Galaxy A12 is a bargain if you’re looking for the Samsung experience in a budget-friendly smartphone.

The global pandemic has pushed industries to shift their operations digitally to better cater to their customers' changing needs. For instance, banking...
Read more
News

With the realme 8 and realme 8 Pro, realme aims to launch a smartphone that’s fit for every Filipino’s passion
Read more