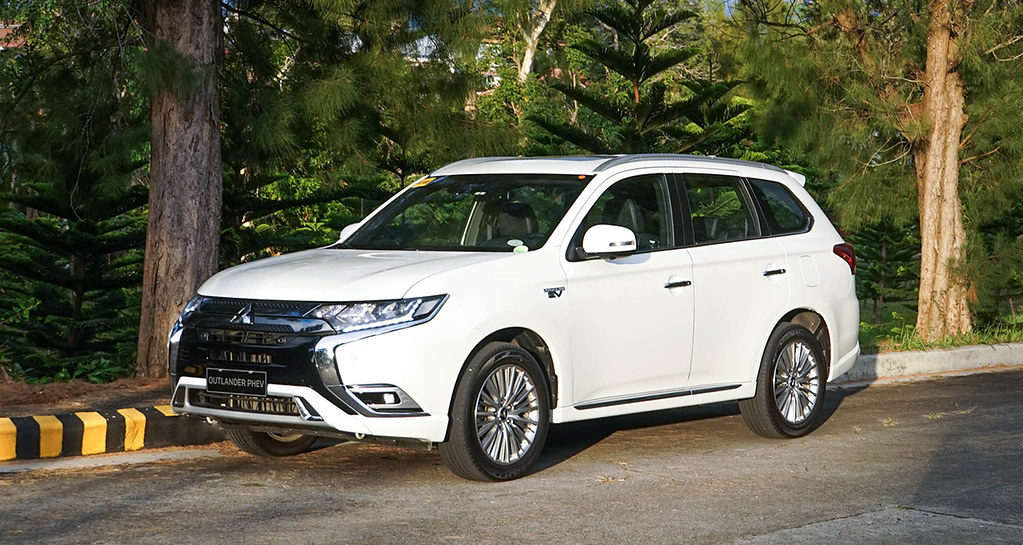 Mitsubishi has recently introduced to the Philippines the electrifying Outlander PHEV, which happens to be the bestselling Plug-In Hybrid SUV globally. With easy and hassle-free recharging, a capable 2.4L engine, low running costs and being more environmentally friendly, Mitsubishi is looking to make quite the splash in the Philippine market.

The Outlander’s EV mode allows for a quieter, more economical drive. Its large battery has a maximum capacity of 13.8kWh, which is equivalent to approximately 55km while solely making use of the pure electric (EV) mode. I was actually fortunate to take the Outlander for a test drive to Tagaytay City from Makati, traveling roughly 50km; to think that this hybrid can run that distance on its battery alone is quite impressive.

The best part about it? Mitsubishi has made the process of charging the Outlander extremely simple and convenient. The cable, which can be found in the trunk, has two ends: one goes into the car’s charging port on its rear right side, while the other connects to a standard wall socket. Simple, and nothing complicated at all, whatsoever.

Its battery also has the capability to recharge on its own. How exactly? The Outlander is equipped with regenerative braking that uses the vehicle’s momentum to recover energy, ultimately charging the battery as you drive. Furthermore, there are paddle selectors on the steering wheel as well, allowing you to control the amount of energy to be regenerated.

This feature, specifically, is what I believe would realistically be one of, if not the, biggest factor in efficient and economical terms.

Unfortunately, unlike a growing number of countries, there aren’t many accessible electric vehicle charging stations in the Philippines, if any. Consequently, you can expect the regenerative brakes to be utilized quite often, which is bound to save you a good sum, nevertheless. On a side note, making more use of the battery is definitely more environmentally friendly, as previously mentioned. The Outlander has lessened its CO2 emissions by an impressive 61%.

As a hybrid vehicle, you can fully expect to still need the services of your engine. In the case of the Outlander, Mitsubishi has placed a very capable one. Its fuel-efficient, 2.4L gasoline engine actually enables travel that is generally farther than other electric vehicles. This reassures you a longer trip without any range anxiety.

This conventional engine works in harmony with two advanced electric motors, as the Outlander seamlessly shifts between gas and electric to optimize an efficient performance.

I was really glad that during my drive to Tagaytay, I was able to experiment with the different drive modes. When I was still within the city, I made use of the EV Drive Mode where only the electric motor alone works, as is most suited when on urban drives and/or short commutes. Once I reached the expressways in the outskirts of the city, Parallel Hybrid Mode was then used, where the vehicle is primarily run by the engine with the assistance from the electric motor. While on the streets heading up to Tagaytay, it was the Series Hybrid Mode used, which is the electric motor doing majority of the work, with assistance from the engine.

Overall, I was impressed with the capabilities and responsiveness that the engine had. What took it to another level, though, was despite the power that it contained, it still retained that quiet and smooth drive, resulting in a very pleasant driving experience. Whether on the busy Manila streets or on the empty provincial roads, the Outlander is both versatile and efficient enough for you to get the most out of your trips, wherever they may lead you.

I liked the general look of the Outlander and its overall design. I recall being surprised by the length of the car, as it seemed longer than your typical SUV. This allowed for a sleek and somewhat sportier look than vehicles of the same category.

At the front, I’d say that it definitely embodies the “Mitsubishi” SUV/crossover look, from its distinctive Dynamic Shield front grille, sleek headlamps, aerodynamic shape, and high ground clearance, to name a few.

For starters, the Outlander’s roomy and comfortable cabin is definitely a big plus for all. Its 8-inch infotainment system is also both Apple CarPlay and Android Auto compatible, which is likewise a plus.

My only concern with the general layout was that there are a number of different buttons, modes, switches, knobs, etc., scattered around—be it on the wheel itself, on the dashboard, by the infotainment system and in between the front seats. This, however, is something you’d might expect from a hybrid vehicle that does possess various modes and functions. Thankfully, I got accustomed to it fairly quickly.

If you thought the Outlander can only charge itself, then you thought wrong. Its two handy power outlets on the center console and by the rear cargo that provide up to 1500W of power supply from the battery can prove to be very handy for certain situations. For example, you can totally set up your TV and PS4 in your Outlander for when traffic gets too unbearable.

We’ve been hearing for quite some time now that hybrid (and full-electric) vehicles are the future. Well, that very “future” is unfolding right before our own eyes, and we have the opportunity to truly experience it and reap its benefits firsthand. Its P2,998,000 price tag might seem like a hefty sum for some, but if you’re looking at the bigger picture and in the long-term, the Outlander will keep your running costs at a minimum, and your satisfaction at a maximum.

Disclaimer: Dates may vary depending on the community quarantine guidelines of each municipality. Global Star Motors (GSM) Corporation, the...
Read more
Load more

Disclaimer: Dates may vary depending on the community quarantine guidelines of each municipality. Global Star Motors (GSM) Corporation, the...
Read more
Automotive

Bentley’s Grand Tourers: More composed than ever through adaptive music

After extensive research and development testing, a demonstration Bentley now has the ability to compose a soundtrack based upon drivers’ inputs and...
Read more
Automotive