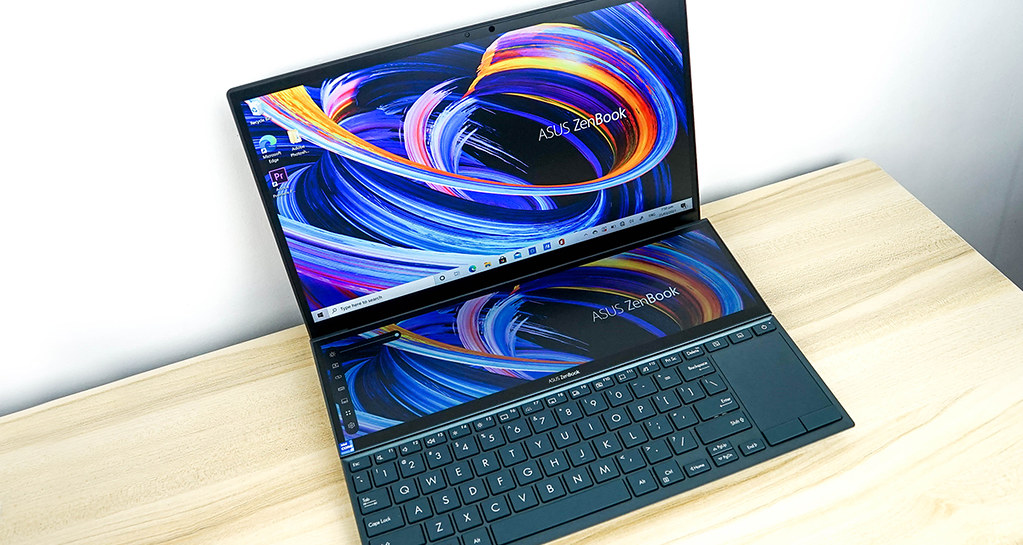 Shortly after the launch of the ZenBook 14 UX435 that featured a ScreenPad 2.0, ASUS now launches the 2021 ZenBook Duo 14 with a better ScreenPad Plus. This device is made for content creators or artists, as it will make their job a whole lot more intuitive, not to mention easier. With that said, let’s take a deep dive to see if this laptop is right for you.

The ZenBook Duo 14 features a similar design as its siblings — an asymmetric-circle trademark ZenBook pattern gives it a modern and sophisticated appearance. This laptop however, comes in Celestial Blue with its chassis and lid made up of magnesium aluminum alloy. It weighs only 1.6kg and is 16.9mm slim, which is 50g lighter and 3mm slimmer than the previous generation.

Despite its slim build, the Duo 14 offers a majority of the ports users often need: 2x Thunderbolt 4, 1x USB 3.2 Gen 1 Type A, 1x HDMI 1.4, 1x audio jack, and 1x MicroSD card reader. The only drawback is it doesn’t have a full MicroSD reader.

On its spine, the Duo 14 features an ErgoLift hinge similar to other ASUS models, but better. The new hinge design incorporates 3 linked structures and minimizes coaxial movement. Zinc alloy is used to enhance durability and strength. Not only does it comfortably lift the laptop’s spine off the table, but it also raises the ScreenPad Plus for better thermal efficiency and visual experiences.

One con to this design means that there is no room where users can rest their wrists. On top of that, the touchpad has been minimized and moved to the far right — not really good for left-handers such as myself. Even being ambidextrous, it really takes a lot of getting used to and sometimes having both hands criss-crossed.

Up front the Duo 14 features a 14-inch FHD Anti-glare touchscreen with incredibly slim 4mm NanoEdge bezels on all 4 sides, which result in a screen-to-body ratio of 93%. Below it is the ScreenPad Plus that functions as a secondary screen with a maximum brightness of 400 nits for better visibility at any angle. Both displays are PANTONE Validated to provide the most precise color accuracy. It also features Low Blue light modes and Anti-Flicker technology (Direct Current mode), and passed the TÜV Rheinland Eye Care certification.

The ScreenPad Plus’ main purpose is to provide users the ultimate edge in workflow and multi-tasking efficiency. This secondary but huge 12.6-inch screen lifts up to 7° thanks to its ErgoLift design. It also features an Active Aerodynamic System (AAS+) that is an integral part of the cooling system. As the laptop opens, the secondary display rises up for a better view while also opening a massive intake gap for 49% higher airflow.

ASUS really took artists and creatives into consideration when they improved the ScreenPad Plus and added a new Control Panel app to ScreenXpert 2.0. This function currently supports Adobe Premiere, After Effects, Photoshop, and Lightroom Classic. When the user opens any of these apps, the Control Panel opens a corresponding panel suited to each software set, enabling commonly used functions such as zoom, brightness, contrast via sliders, buttons and dials. Creators can fully customize the functions and icon positioning for each of the app-specific decks. The Control Panel will automatically launch the deck assigned to each of the supported apps.

When a window is opened, a built-in floating shortcut menu with Switcher and ViewMax automatically pops up on the ScreenPad. The App Switcher allows users to define where windows should be shifted. With just a flick of a finger, users can easily transfer windows from the main screen to the ScreenPad and vice versa. When relaxing, users can opt to use the Touchpad mode to turn it into one massive touchpad.

In addition to the AAS+, the Duo 14 also features a new thermal design with two highly efficient fans, each of which features 59 fan blades, up from the previous generation which had 43 blades.

The Duo 14 features WiFi 6 and Bluetooth 5 for a complete set of modern high-speed connectivity. It has passed Intel Evo platform certifications, which guarantees it’s a well-rounded ultra-portable laptop with snappy performance and all the latest technologies within it.

We ran our device on a couple of benchmarks and got these results:

The device sports a 70Wh battery paired with a 65W charger, and a single charge is expected to last users as long as 17 hours straight. It also features a built-in G-Sensor that automatically reduces the overall power consumption to boost its battery life when the laptop is opened to less than 80°.

The ASUS ZenBook Duo 14 UX482 is priced at P99,995 for the Intel core-i7 variant, while the i5 is P79,995. Quite pricey but remember, this laptop is not like every other 14-inch laptop. You’re getting two screens, solid hardware, performance and cooling, and a great battery life. As a content creator, the Control Panel on the ScreenPad Plus was definitely a bonus and something I never thought I needed. Only tradeoff would be losing the space for your wrist as the keyboard is pushed down below the ScreenPad and the trackpad on the far right. This makes it a bit uncomfortable using on one’s lap, making it better suited on a desk. It really takes a lot of adjustment but if you really prefer the double screen, then adjusting wouldn’t be a problem.

After testing their virtual racing skills via online drag racing, The 8 celebrity racers were divided into two teams to test their...
Read more
Automotive

Much like how Tony Stark is continuously upgrading his Iron Man suit, Motolite is constantly introducing new features to the Motolite Excel...
Read more
News

Hundreds of compatible ASUS devices will become eligible for free upgrade to new operating system after it becomes available, including the latest...
Read more
Automotive

Have you noticed a disturbing trend happening on our roads lately?  Almost every day, we hear and see news about horrible road accidents with victims often ending...
Read more
Lifestyle

Hundreds of compatible ASUS devices will become eligible for free upgrade to new operating system after it becomes available, including the latest...
Read more
News

After testing their virtual racing skills via online drag racing, The 8 celebrity racers were divided into two teams to test their...
Read more

Much like how Tony Stark is continuously upgrading his Iron Man suit, Motolite is constantly introducing new features to the Motolite Excel...
Read more

Hundreds of compatible ASUS devices will become eligible for free upgrade to new operating system after it becomes available, including the latest...
Read more