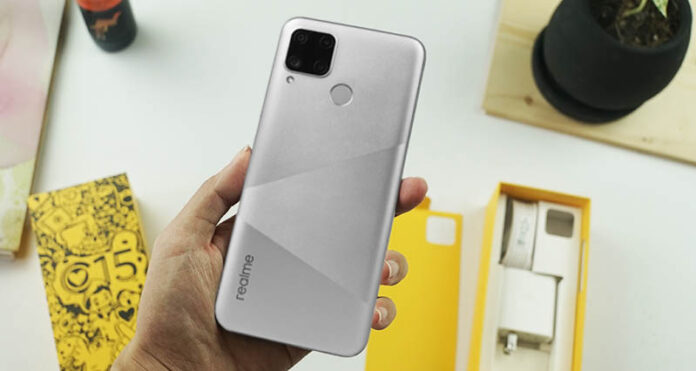 In the strange times we currently are in, we find ourselves using our devices and utilizing many of its functions now more than ever. One that would be both useful and practical in times like these, the C15 smartphone that realme has recently introduced boasts numerous enhanced and exciting features for users to enjoy. This smartphone is the latest addition to the current C Series of realme.

The realme C15 comes in two colorways: Seagull Silver and Marine Blue. The smartphone comes in a new and trendy geometric design. Its front side has a mini-drop display, giving the phone a 6.5 inch screen with an 88.7% screen-to-body ratio. A screen of this size is especially appreciated when doing various activities such as watching videos or playing games. This was particularly useful for me when utilizing the split-screen feature, as I multitask and use two apps at once without having to worry about either of the screens being too small to work with. Be it for regular smartphone use or for the aforementioned highly visual activities, this smartphone definitely offers a great and immersive visual experience to the user.

Despite its relatively large size and display, this phone doesn’t feel bulky due to its suave texture and curvatures, making this phone feel pleasant when handled. Moreover, one might expect a device with a battery capacity that this phone possesses to carry a lot of weight. Although the C15 is versatile enough to serve as your own power bank, it definitely does not have the same weight as one.

On top of realme’s launch of the C15 smartphone, they announced that they will also offer a Philippine-exclusive realme C15 Doodle Box Edition. This will only be available online via Lazada, limited to the first 1000 of its units sold. Its eye-catching and playful design aptly reflect the appeal that the C15 has.

realme also introduced a square rear camera setup design comprised of four total cameras: a 13MP primary lens, 2MP portrait lens, 8MP ultra wide-angle lens, as well as a 2MP retro lens. This enables the phone to capture clear details and have high-quality snapshots. Its camera also has an f/2.2 large aperture for better light intake and a wide-angle lens with a 119° view. The C15 also has a Nightscape Mode feature that optimizes the pictures’ brightness and highlights by compiling multiple photos taken successively, then ultimately compiling them into one picture.

I don’t necessarily consider myself a photographer, nor do I necessarily take a lot of photos. Nonetheless, I enjoyed experimenting with the various camera functions that this phone has to offer. More importantly, however, the photos came out pretty well for all of its different features.

The realme C15 is engined by a Helio G35 Processor, a 64-bit Octa-core Cortex-A53 and up to 2.3GHz. In addition, realme offers two different kinds of interior: a dyad of either a 3GB RAM with 64GB storage, or a 4GB RAM with 64GB storage. These are altogether beneficial in many aspects such as multitasking and all-around use, but most especially favorable for gaming purposes. Call of Duty, Mobile Legends, PUBG and Clash Royale are just some of the many games I was able to enjoy on this smartphone. Complex and fast-paced games like these are definitely better played and experienced on devices with great processors and large screens, both of which this phone has.

One of this smartphone’s greatest facets is its high-capacity battery. Not only does this have a 6,000mAh unit, but is also partnered with an 18-watt Quick-Charge which should allow the device to charge faster but we still timed a total of 3 hours. Impressively, the pairing of a battery and Quick-Charge of such capacities is claimed to be the first of its kind in comparison to competitors of the same price point. Additionally, the realme C15 has a Super Power Eco Mode to minimize battery usage when activated. Topping this off, the smartphone also supports 10-watt reverse charge which grants the phone to serve as a power bank for your other devices.

Personally, a smartphone with a battery and charging capacity of this kind works wonders as someone who spends a lot of time on apps that consume a lot of the phone’s energy. Streaming music constantly, going on Netflix marathons, and playing online games all day are just some of the many things I was able to enjoy with very minimum battery drainage despite continuous usage.

As mentioned a smartphone’s key aspects for me would be its battery, mainly due to both its high capacity as well as its great functionality. Nowadays, we are in constant use of multiple everyday devices such as phones, bluetooth headsets and the like. Given this, how convenient would it be to have the luxury of not only having a great battery capacity and while ability to charge other devices? Secondly, the Helio G35 Processor and 6.5 inch display partnership is integral for the user’s immersive visual experience, most especially for gaming and streaming purposes. Both these key aspects are what drive this phone’s overall great performance, especially in consideration at its price point of Php6,490 for the 3GB RAM + 64GB storage and Php 6,990 for the 4GB RAM + 64GB storage.