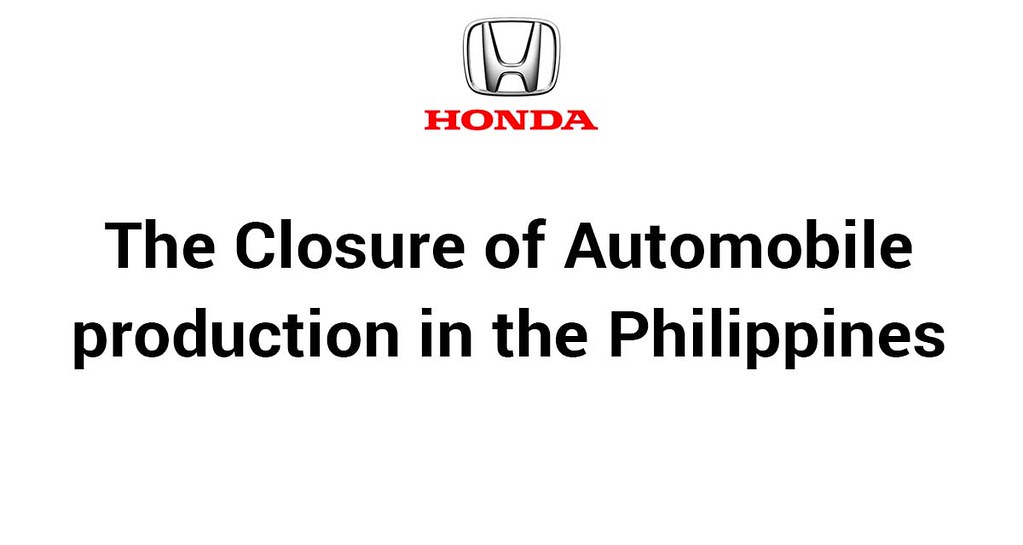 Social media is yet again on overdrive with the announcement of Honda Cars Philippines’ closure of their Sta. Rosa plant. Not surprisingly, people are speculating about the reasons. Here are some of the reasons I’ve seen on the posts and on the comments sections:

These are just nine of what seems like more than a hundred speculations offered by netizens as to why Honda shut down its factory. Here are my comments on those online reactions, number by number (mind you, these opinions are mine and not HCPI’s):

Then there’s the government issuing limits on the number of cars for the TNVS companies, which slammed the brakes on subcompact car sales growth. Toyota and Mitsubishi ended up with so many Vios and Mirage units in their stockyards — spooking other car companies from whatever local manufacturing they may have had in mind, perhaps forever.

Many factors figured in Honda’s decision to close its manufacturing operations. But it’s ultimately down to economies of scale (on a global or at least regional level) as well as the bottom line. Car companies will always try to sell the maximum number of cars they could. And obviously the lower the price of any model, the more units of it they can sell. So if Thailand can manufacture a Honda City and land it in the Philippines at a theoretical total cost of P500,000, while the Sta. Rosa plant can make one at P550,000, guess which factory will get the green light? That’s Economics 101 for you.

And speaking of Econ 101, here are the ASEAN numbers in terms of vehicle production (not sales) by country: Thailand leads with 2,013,710 units manufactured there last year (roughly half of which were exported). Indonesia follows with 1,286,850 units while Malaysia is third with 571,630 units made in that country.

Vietnam, having overtaken the Philippines, is now the fourth biggest ASEAN vehicle manufacturer with 176,200 units. The Philippines is now in fifth with 95,090 vehicles locally made. Myanmar is the only other ASEAN country that makes cars and it produced 15,500 units there last year. Those numbers certainly put Philippine automobile production in perspective.

While the closure is tragic in light of the some 300 people who will lose their jobs, it’s really nothing new when viewed with the earlier plant closures done by Ford and other brands over the years.

In the end, Honda’s decision to close its Sta. Rosa factory is a sad but ultimately sound and practically predictable one. At this point, the most that the government can do is to help ensure that Toyota’s and Mitsubishi’s local plants not just remain fiscally feasible, but actually have the potential to turn a decent long-term profit. Keeping them alive is a matter of national urgency — because the alternative is almost unthinkable.

Women leaders are better at handling the pandemic, The New York Times said. And for the longest time, we have focused on the narratives...
Read more
IMO

6 Things a Plantito/Plantita Should Know

1. As clichè as this sounds, patience is key. Being a plantito/plantita requires consistency and patience. There will be...
Read more
IMO

6 questions to ask yourself before you voice your opinion

The plethora of platforms that are available to us today gives many of us the opportunity to share our opinions and join...
Read more
IMO

With the pandemic still not over in the country, distance learning is the best alternative to have our students continue their education....
Read more