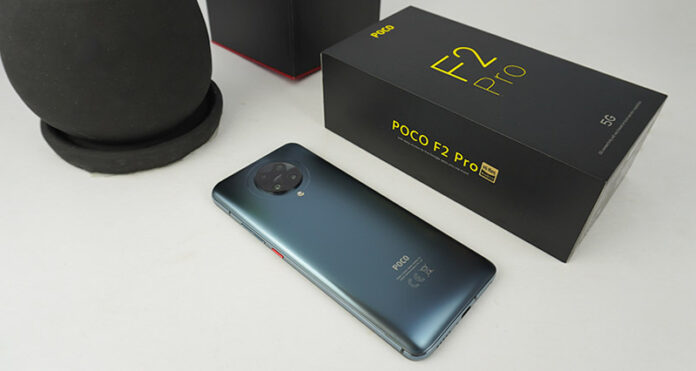 The POCO F2 Pro comes in four colorways—Electric Purple, Phantom White, Neon Blue, and Cyber Grey, which we have on hand. It feels pretty hefty weighing 219g, complemented with its sleek look with an aluminum frame that uses Corning Gorilla Glass 5 for the front and back.

On its top just like most Xiaomi devices, features an IR blaster which can be used with its pre-installed Mi Remote.

Up front it boasts a 6.67-inch AMOLED Full Screen Display with a 2400 x 1080 FHD+ resolution. coupled with HDR10+ for accurate colors and DC dimming for reduced flickering. The screen provides an immersive and rich experience no matter what you may be using the phone for. 360° triple ambient light sensors are capable of accurately spotting ambient light so that the phone can automatically adjust the screen’s brightness. This feature is especially useful when your eyes are straining to look at the screen under the sun or in a dark setting. To further tailor the display to your liking, you can even personalize the color scheme of the display using the phone’s RGB Color Space and Color Gamut settings.

The 64MP main camera with a 13MP ultra wide-angle lens, 5MP macro sensor with an optimal shooting range of 3cm-7cm and a 2MP depth sensor are one of the most noteworthy achievements of the POCO F2 Pro. Using a Sony IMX686 sensor, the main camera is capable of expert level photography and recording with a multitude of features such as AI 8K Video, Cinematic Mode, Movie Frame and ShootSteady Video. The 120fps front camera also offers exceptionally captured fun through its slow-motion video mode and HEIF shooting which simultaneously enhances picture quality while saving up to 40% of storage space.

It also has a lot of creative features to help creators or those aspiring to be — and it’s all available on the camera app. You can easily step up your vlogging game with its in-house Vlog that comes with different themes and filters and you can make it on the spot. Secondly, it also has Clone so you can put yourself more than once in one picture. Lastly, Front & Back which allows you take a video using the front and back camera at the same time.

You won’t find the 20MP front camera on the screen because it pops up on top and it supports 1080p at 30fps.

The front camera can also be used for facial recognition; however, it will take a while as it still has to pop up for it to unlock the phone. A better option, which I personally used more, is the in-display fingerprint scanner.

The new POCO F2 Pro is a powerful smartphone with a modern design and strong performance, perfect for gaming or other high-intensity tasks. This is made possible through its Kryo 585 CPU and Adreno 650 GPU. Equipped with a Qualcomm Snapdragon 865 processor with 7nm process technology (which delivers a 25% performance boost), the POCO F2 Pro is capable of graphic rendering improvement while also lessening power consumption. LPDDR5 memory and UFS 3.1 flash storage ensure that startup and operation speeds are optimal while decreasing loading times and supporting multi-tasking. This is achievable by its LiquidCool Technology 2.0, one of the largest vapor chambers in the business covering 28% of the phone. A multi-layer liquid cooling process makes sure the CPU temperature can be lessened by as much as 14°C.

The MIUI interface allows the POCO F2 Pro to provide smooth and enhanced user operation. The app drawer can be customized so that you can group apps together and find them more readily. A dark mode also decreases power consumption and eases eye strain.

The connectivity capabilities of the POCO F2 Pro allow fast and stable online connection wherever you happen to be. Stream videos and enjoy lag-free gaming with both WiFi-6 (2.92 Gbps download rate and 9.6 Gbps internet speed on average) and 5G.

The massive 4700mAh high-capacity battery allows you to comfortably use your phone for more than one day before having to charge. Test research has shown the battery can support an impressive idle time of 17 days, gaming time of 13 hours or 6 hours of video recording in 1080p.

The POCO F2 Pro has a lot flagship specs but it comes at a cost. It’s a little bit more expensive than its predecessor but it still doesn’t come with the traditional flagship price, making it really worth it and puts in true flagship category.