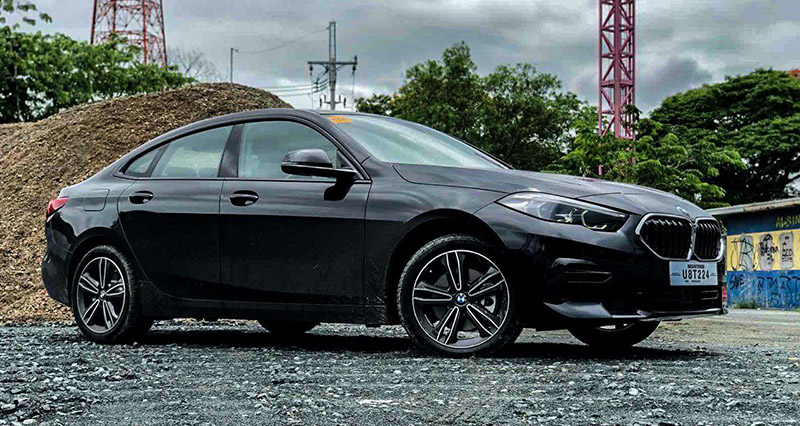 I’ve always been a big fan of the BMW 4 Series Gran Coupe. While the Bavarian brand has become legendary with its tall, upright sports sedans and coupes, it’s the current 4 Series Gran Coupe which I find the best-looking four-door BMW today. Many car companies have tried to make sedans with coupe-like profiles, but the 4 Series Gran Coupe is the effortless champ in this arena, rivaling even the much newer 8 Series Gran Coupe—at least to my eyes.

The best part, of course, is that the Gran Coupe still delivers the legendary on-road dynamics that has become synonymous with the marque from Munich. I had the good fortune to have driven a 420d Gran Coupe for the better part of three years. It was eye candy from the outside and driving bliss from the inside. Each moment with the car—inside or out—was a treat.

And now there’s a new Gran Coupe on the block. It’s the first ever 2 Series Gran Coupe (F44), launched today by SMC Asia Car Distributors Corp., the official importer and distributor of BMW in the Philippines. Available in one variant—the subcompact-sized 218i Gran Coupe Sport—this newcomer has most, but not all, of the ingredients of its illustrious big brother.

Why not all? Because the new 2 Series Gran Coupe is BMW’s first front-wheel drive sedan. It’s based on the new 1 Series hatchback, which switched to a FWD layout last year. Furnished with innovative chassis and control system technologies, the four-door coupé raises the bar in driving dynamics and agility in its class (which includes the coupe-like Mercedes-Benz CLA-Class). It doesn’t have classic rear-wheel drive at-the-limit handling, but you won’t miss it at all in day to day city driving. What you’ll experience in your daily commute, however, is a delightful go-kart-like responsiveness borne of many years of perfection rocketing Mini Coopers from apex to apex. Yes, the sharing of components—particularly the UKL2 architecture—between BMW and Mini have worked wonders. They may have been polar opposites in drivetrain design philosophy over the decades, but they have both always been driver’s cars of the highest order.

Power—again derived from Mini—comes from a 1.5-liter 12-valve 3-cylinder petrol engine. Three cylinders may seem wimpy on paper, but slapping on a turbocharger makes it one potent mill—to the tune of 140hp and 220Nm of torque. It’s enough to propel the 218i to 100 km/h in 8.5 seconds and attain a top speed of 210 km/h. Those are definitely not top-dog numbers, but remember that the 218i is the entry level 2 Series Gran Coupe. More (and much more) potent performance are available in the 220d and the M235i xDrive variants of the Gran Coupe.

The engine of the 218i is mated to a 7-speed double-clutch Steptronic automatic that’s also found in Minis.

Of course, the main reason people would buy a 2 Series Gran Coupe—instead of a more traditional sedan—is style. The standout characteristic of the BMW 2 Series Gran Coupé is its dynamically stretched silhouette which, like the four frameless side doors, is lifted from the classic coupéblueprint.

The new Gran Coupé model also features slightly angled headlights, which feature full-LED technology as standard, and form a prominent BMW four-eyed face and draw attention to the familiar BMW kidney grille. Exclusive details also include the contoured kidney grille bars with an eye-catching indentation and, most strikingly, the all-new design of the rear lights, which resemble those of the spectacular 8 Series Gran Coupe and which extend well into the center of the rear end. They hand over to a high-gloss black band, which runs up to and encircles the centrally located BMW badge. This combination of the rear lights and connecting element makes a horizontal statement and accentuates the width of the rear.

The BMW 2 Series Gran Coupé measures 4,526mm in length and 1,800mm in width, but stands just 1,420mm high. Despite its low-slung appearance, passengers still enjoy decent rear legroom, thanks to the 2,670mm wheelbase. The 2 Series Gran Coupe actually has better rear legroom and headroom than its bigger 4 Series equivalent. Unlike the liftback rear end of the 4 Series Gran Coupe, the 2 Series has a conventional trunk. At least the 430-liter trunk can be expanded in various ways, thanks to the 40/20/40-split rear seatback (which can be opened from the back). The tailgate opens automatically at the press of a button or – if the optional Comfort Access is specified – with the wave of a foot.

In the BMW 2 Series 218i Gran Coupé Sport, Sensatec upholstery ensures comfort and durability, with the Sport front seats being electronically adjustable with a memory function for the driver. Interior trim strips are finished in “Illuminated Berlin” design, and a Sport steering wheel allows access to many vehicular functions.

Behind the wheel, you are greeted by various controls geared squarely to the driver and divided by function. For example, air conditioning and lighting controls are grouped together and laid out intuitively. Access to the infotainment system is via the familiar BMW iDrive wheel, or a touchscreen 8.8-inch Central Information Display, all part of the seamless BMW Live Cockpit.

The Central Information Display also offers guidance when using BMW’s innovative Parking Assistant, allowing automatic assisted parking in spaces that are either parallel or perpendicular to the road, as well as automatic maneuvering out of parallel parking spaces. Park Distance Control also comes as standard, offering front and rear parking sensors, paired with a rear-view camera.

The BMW 218i Gran Coupé Sport is available in Alpine White, Black Sapphire, Melbourne Red, and Mineral Grey. I got to drive the test unit in black, which I felt made the car look smaller and hid its beautiful design details. The red would certainly make the car stand out and visually bring out its most sporting side.

As with all new BMWs, the new 2 Series Gran Coupé comes with a 5-year or 200,000-kilometer manufacturer’s warranty – a new standard in the premium automotive segment in the Philippines.

Toyota Motor Corporation (TMC) announces its sales, production, and export results for October 2020 as well as the cumulative total from January...
Read more

How you wish this daunting year was over already so you could move on to a 'now normal' life. If only there...
Read more

Geely Philippines is closing out the year on a high note as it welcomed Q4 with a great number of Geely Coolray...
Read more