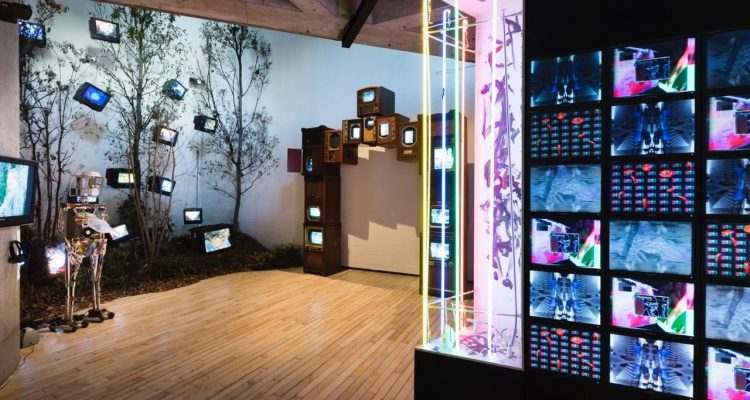 “The video synthesizer will enable us to shape the TV screen canvas:
as precisely as Leonardo
as freely as Picasso
as colorfully as Renoir
as profoundly as Mondrian
as violently as Pollock and
as lyrically as Jasper Johns.”

Tokyo, Japan—In the era of the 1960s and 1970s, man’s mode of communication was fundamentally restricted to the telephone, telegram, and handwritten letters traveling across global post offices. It would not have been surprising, therefore, that contemporary world’s “Father of Video Art” Nam June Paik sought so enthusiastically that one medium of voice message transmission and visual imagery through television screens. Paik’s creation of the video synthesizer in 1969 paved the road to multi-dimensional telecommunication that made it possible for internal video patterns to generate electronically visual images and broadcasts without camera technology, and to record live footages with computer-generated sources.

Born in Korea before the atrocities of World War II, and fleeing the country during the Korean War, Paik with his family sought refuge in Hong Kong and Japan where he entered the University of Tokyo to study music and liberal arts. He then moved to Germany to learn contemporary music and music history. His remaining years in Germany would eventually shape a crucial pivot in his life. There he encountered the experimental minds of American composer, music theorist, artist, and philosopher John Cage and German performance and installation artist and theorist Joseph Beuys.

Together with Cage and Beuys, Paik joined a wide interdisciplinary group of avant-garde artists, poets, and composers devoted to the radical and experimental generation of art forms that constructed the Fluxus movement of the 1960s and 1970s. They participated actively in performance events that encouraged the spirituality of Neo-Dada music, concrete poetry, and anti-commercialism—ideologies that visibly influenced Paik’s own artistic vision. Focusing profusely on the Neo-Dada art movement, Paik debuted his sweeping ideas at the Exposition of Music-Electronic Television Exhibition in Wuppertal, Germany.

Consequently, in the early 1960s, Japanese engineers Hideo Uchida and Shuya Abe introduced Paik to the possible technology of intercepting electrons in television screens. Today, this evolution in video installation art has made Nam June Paik one of the world’s most innovative artists in the dimension of visual imagery and sound fusion.

At the Watari Museum of Contemporary Art in Tokyo, a comprehensive exhibition, the 100th Anniversary Retrospective of Nam June Paik “Who Will Be Laughing in 2020 ? + ? = ? ?”, had opened in two phases. The first phase, covering Paik’s art installations in three rooms from 1956-1988 took place from July to October 2016. The second phase, summarizing Paik’s video art career from 1990 until his death in 2006, is running until January 29th.

In the second phase of this exhibition, the museum continues the art journey of Paik in four rooms, each depicting several identifiable highlights of Paik’s video art. In Room #4: 1990—Paik’s Earth Theory, we witness Paik’s installation “Forest of Cage—Revelation of the Forest” 1993 that consists of about 20 monitors, three video channels, three players, and a stereo, all scattered and hung on tree branches, displaying a vibrant collage of footage, documents, and the artist’s personal memorabilia to imbue the transgression of time and space. Paik represents himself as a humanized robot amongst the forest art that he dedicated to John Cage. The room also includes his 1986 work Passage, illustrating his first experiments with the television. Wooden TV cabinets formed in an arch (or passage) display changing scenes of images in a frantic mode.

Room #5: 1993—Eurasian Way and Eiheiji Temple is a travel installation of Paik’s meditative journey from Moscow to Siberia, gathering a wide range of ethnic objects, costumes, books, and other paraphernalia. The inspiration for this setting stemmed from Paik’s and Joseph Beuys’s steadfast determination to explore and unite the contradictions and commonalities of the West (Europe) and the East (Asia). Paik searched for a common rhythm in Eastern and Western cultures that could be joined through satellite technology, and, in doing so, contradict the universal assumption that these two cultures would always be divided. The room also shows Paik’s Tribute to Eiheiji Temple, a production of the Zen Buddhism practice Paik underwent at the temple.

Fragments of the deep and colorful friendship between Paik and Beuys since 1961 fill up Room #6: 1961-2006 Joseph Beuys and Nam June Paik. Beuys surpassed his fear of the East by a momentous visit to Japan in 1984. Following his formation of the political party EURASIA in 1963, Beuys realized a particular type of consciousness that fused the mind-body with the physical environment, and discovered the Japanese people’s immense understanding of this ideology. Paik interpreted this in his Beuys Vox (1988) that consists of coyote stuffing, a hat, sleigh, wooden chips, 11 monitors, 10 TV cabinets, one video channel, and one playing machine. A full collection of screens, photographs, catalogues, records, videotapes, and other objects signed by Beuys make up the art composition.

Finally, in Room #7: 2020—Who Will Be Laughing ? + ? = ? ? Paik poses a rhetorical view of the dominance of China over world politics and social values. As Park wrote, “Suppose that in 2020 China’s GNP surpassed the United States and became the world’s best. If there is no civil war, the population is 5 to 1 so it is not impossible. At that time, there must be one person laughing at Nitanita at the graveyard…What is his name?” The room also displays his work Time in Triangular (1993) combining the WATARI-UM architecture designed by Mario Botta and the Triangular Flatiron Building in New York.

Paik believed in the application of what he termed “satellite art”—creating high art with new materials. He envisioned the use of temporal features of the arts to produce a resonating rhythm in video aesthetics. His terminology, therefore, “electronic super highway” generates his vision to create passageways across the globe that welcome new forms to surface.

As Nam June Paik wrote in Media Planning for the Postindustrial Society—The 21st Century is now only 26 years away, “The building of new electronic super highways will become an even huger enterprise. Assuming we connect New York with Los Angeles by means of an electronic telecommunication network that operates in strong transmission ranges, as well as with continental satellites, wave guides, bundled coaxial cable, and later also via laser beam fiber optics: the expenditure would be about the same as for a Moon landing, except that the benefits in term of by-products would be greater.”

In a way, it was believed that he may have foreseen the phenomenon of the internet as the ultimate entity that connects cultures, races, customs, colors, and minds without borders. For many purists, this mission may as well epitomize a physical Paradise. However, as Paik commented in an interview with Lynn Hershmann Leeson in Artweek, “When we shift our economic priorities of consuming to more spiritual sphere then we can solve all economic problems with much less energy. I found it is much easier to go to Paradise than to make this a paradise. It’s much cheaper to die than to make this world a paradise.”

Indeed, in his own paradise, Nam June Paik had successfully constructed a floating universe of electrons and images that speak, move and pulsate—whether in an electrifying euphoria or in the death of silence—in an effort to humanize technology like no master has ever done before.

With governments implementing self-quarantine measures for its citizens amidst the COVID-19 outbreak, daily tasks like getting the groceries and other items become...
Read more
Features

Waze, DoT partner to Bring the Wonders of the Philippines Closer to Filipinos

Waze and the Philippines' Department of Tourism (DOT) have teamed up to promote the cultural and natural wonders of the Philippines with...
Read more
Automotive

Maxus Philippines, the official importer and distributor of Maxus commercial vehicles in the country, is set to launch the Maxus T60 pickup...
Read more
Features