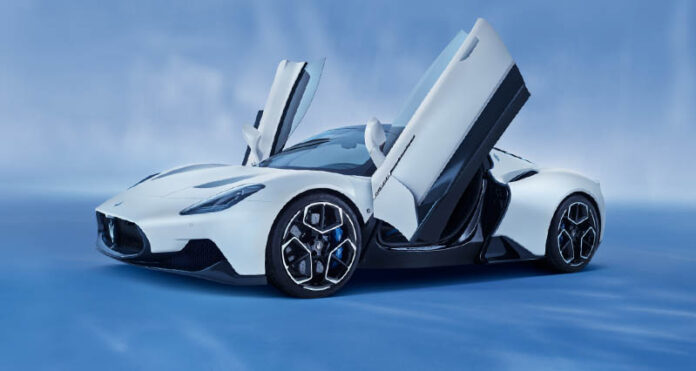 The last time I drooled over a Maserati, Ferdinand Marcos was the President of the Philippines and Sebastian Vettel wouldn’t be born yet for another 10 years. It was the late 70s (when I just hit my teens) and the exotic car I was crushing on was its first-ever mid-engine car, the Ferrari-fighting Maserati Bora (two decades before both iconic Italian brands became part of the Fiat empire).

Modena-based Maserati has been around since 1914, and they have been famous for their luxurious and fast grand touring cars and sedans — almost like the Italian equivalent of Britain’s Jaguar. Which makes the mid-engined Maserati extra-rare. In over a hundred years, Maserati has made only three mid-engined sports cars: the stunning 1971 Bora, the unicorn-like (only 50 were made) and breathtakingly expensive 2004 MC12, and now, the sensational MC20.

The MC20 (MC for Maserati Corse — “corse” is Italian for racing — and 20 for 2020, the year of its world première and the start of the company’s new era) is the Maserati that redefines the brand with the trident logo.

Unlike the MC12, which was based on the Ferrari Enzo’s V12 mechanicals, and several Maseratis with Ferrari V8 engines, the MC20 boasts an engine that is pure Modena, not Maranello — a first for Maserati in over 20 years. Is this an offshoot of Ferrari being spun off in 2016 from the Fiat Chrysler Auto group from where Maserati belongs? Time will tell if we’ll continue seeing Ferrari-engined Maseratis. But this new purely Maserati-designed and -made engine is truly a piece of work.

Aptly named Nettuno (Italian for “Neptune, the trident-wielding god of the seas), the new patented Maserati Twin Combustion Engine is a twin-turbo, twin-spark plug-per-cylinder V6 developing true supercar levels of power — 630hp and 730Nm of torque. Those numbers are good for a 0-100 km/h acceleration in under 2.9 seconds and a top speed of over 325 km/h.

The guiding theme of the carbon-fiber-bodied MC20’S design was the brand’s historic identity, with all the elegance, performance and comfort integral to its Modenese legacy. Its front end bears a strong resemblance to its MC12 forebear. Distinctly different are the MC20’s butterfly doors, which are not only stunningly beautiful but also functional, as they improve the car’s ergonomics and enable optimal access to and from the cabin. The aerodynamics were designed through over 2,000 man-hours in the Dallara Wind Tunnel and more than a thousand CFD (Computational Fluid Dynamics) simulations. The resulting car has a sleek line, with no external appendages aside from a discreet rear spoiler that improves downforce without detracting from the MC20’s sensuous lines. It’s a delightfully Italian look, although I daresay the rear end looks so much like an Aston Martin’s. The MC20 will also spawn convertible and pure-electric versions.

Inside the racecar-like yet luxuriously fitted cabin, every component has a purpose, and is completely driver-oriented. Simple forms, very few sharp edges and minimal distractions. Two 10 inch screens: one for the cockpit and the other for the Maserati Touch Control Plus (MTC Plus MIA). Simplicity is also the keynote of the carbon fiber-clad central console, with just a few features: the wireless smartphone charger, the driving mode selector (GT, Wet, Sport, Corsa and a fifth, ESC Off, which deactivates the control functions), two speed selection buttons, power window controls, the Multimedia System controls, and a handy storage compartment underneath the armrest. All the other controls are on the steering wheel, with the ignition button on the left and the launch control on the right. The Maserati Connect program includes connected navigation, Alexa and Wifi Hotspot and can also be managed through the Maserati Connect smartphone or smartwatch app.

Both visually and conceptually, the MC20 bears strong references to the MC12, the car that marked Maserati’s racing comeback in 2004. In the same way as its predecessor, MC20, with its explicitly racing soul clear from its name alone, announces the brand’s intention to return to the world of racing.No pricing has been announced for the MC20. Suffice to say that it’ll be produced in much greater numbers than the MC12 and is anticipated to be priced not far from its 600+hp mid-engined rivals, the Lamborghini Huracan, the Audi R8 V10, and the McLarens. Incredibly fast, breathtakingly sexy, and fabulously Italian — the Maserati MC20 has just made the mid-engined supercar market so much more exciting.