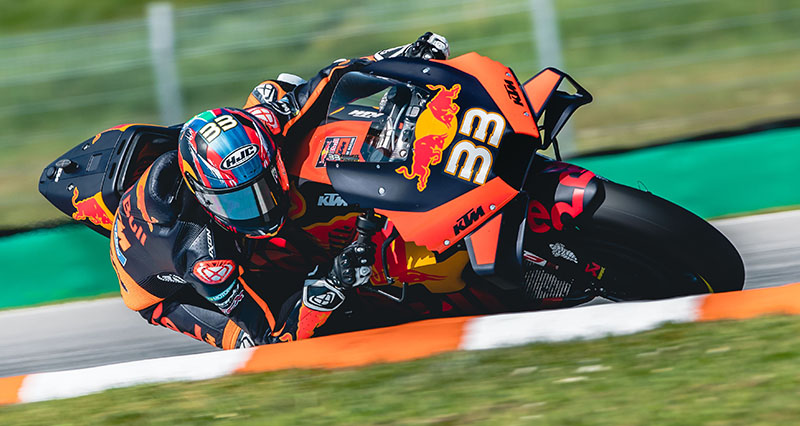 Round three of the 2020 series will remain a poignant and memorable event for KTM, which entered the MotoGP series full-time in 2017 with the then newly-developed KTM RC16. The manufacturer has since enjoyed front row qualifying results and a podium finish prior to yesterday’s incredible victory, where rookie Binder rewarded the project’s efforts at the Automotodrom Brno.

Binder rode a calculated race, working his way through the front-runners from his seventh position on the grid to take the lead with nine laps to go of 21. The Red Bull KTM Factory Racing rider went from strength-to-strength, stretching out a comfortable advantage to take his, KTM’s and South Africa’s first ever race win in MotoGP – the pinnacle of two-wheeled motorsport. Binder is also the first rookie to win a race since 2013. Teammate Pol Espargaró, who has played a pivotal role in KTM’s MotoGP campaign and enjoyed the manufacturer’s maiden podium in the class in 2018, was unlucky to miss out on the battle for victory in yesterday’s race after colliding with another rider in the fight for third place. Red Bull KTM Tech3’s Miguel Oliveira enjoyed his best finish in the class with sixth position.

KTM’s fourth season in the MotoGP category has proven exciting so far with the KTM RC16 battling at the sharp end of the field in the opening three races. The test team with rider Mika Kallio, who has been involved with the project from the beginning, along with MotoGP legend Dani Pedrosa has been fundamental in accelerating the development of the KTM RC16 in combination with the race team and engineers from KTM’s base in Munderfing and Mattighofen. In addition, this major sporting milestone for the brand also highlights KTM’s commitment to developing young riders as Binder has raced aboard orange machinery successfully in the Red Bull MotoGP Rookies Cup, Moto3™, Moto2™ and now finally MotoGP.