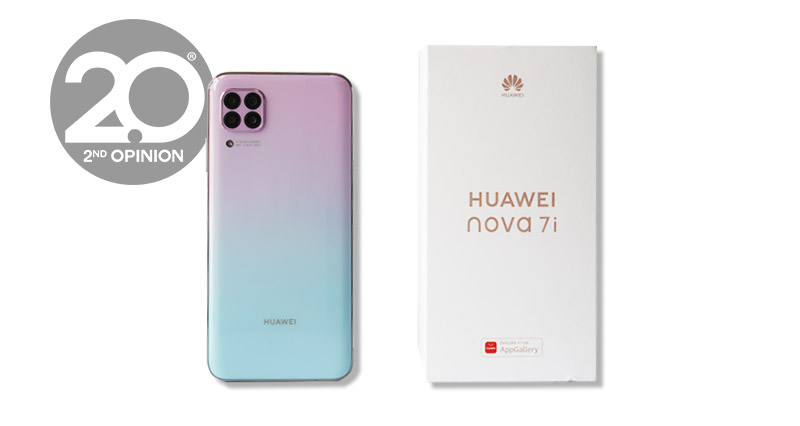 The Huawei nova 7i is available in three bold colorways: Sakura Pink, Crush Green, and Classic Black. The dreamy effect of these colors is produced by a gradient manufacturing process, which “underlays the back of the device with a special film that produces a unique glare effect while improving scratch resistance.”

Opposite these colorful backsides is a 6.4″ Punch FullView Display which provides an impressive window into the phone’s many features. The display supports a Full HD+ resolution of 2310×1080, rendering details in accurate and crisp quality. There are thin notches obstructing this view, allowing you to get the most clarity out of the phone’s display with a total 90.6% screen-to-body ratio. It offered vibrant colors and immersive video playback.

The Fingerprint Power Button mounted to the side of the phone allows users to unlock their phone faster and at a higher success rate. On the right you’ll find the card tray for two nano-SIM cards and micro SD card. It allows the device to both answer calls on one SIM and do other tasks such as play online games on the other. Additionally, the phone can effectively block interference from false 2G base stations providing protection and security.

On the left side, it has the card tray for two nano-SIM cards, a microSD slot. Additionally, the phone can effectively block interference from false 2G base stations providing protection and security.

Underneath is a 3.5mm headphone jack, USB-C port, microphone and speakers. It also has another mic on the top of the phone. The speaker’s performance was really loud with minimal sound distortion, but it could still be better.

The protruding 2×2 camera configuration of the nova 7i’s camera fits four individual cameras. This camera is bordered by a thin metal frame, neatly complimenting the sleek design while offering robust durability. Apart from these design features, the 48MP quad AI cameras allow users to capture sharp, wide, and zoomed shots in most situations, while the front camera’s Super Night Selfie 2.0 allows users to capture impressive selfies even in low light settings. Huawei’s AI camera feature works with both cameras. The pictures were true to the subjects colors even with less favorable lighting. However, too much exposure can lead to over-saturation. This also applies to the hole punch selfie-friendly 16MP front camera on the top left of the screen which is just as substantial.

It also has an 8MP Ultra-Wide Angle Camera with a field of view of 120°. The AI technology prevents distortion making pictures come out clean and clear. The third camera is the 2MP Macro Camera with a 40mm lens and sensor with 1.75 μm which allows you to capture Super Macro shots of up-close and tiny subjects with an optimal distance of 4cm. It captured all the details of the subject but the colors appeared dull even with good lighting. Lastly, the 2MP Bokeh Camera comes with a depth simulator. This gently encircles the subject, producing an accurate blurring effect for those artistic portraits. There’s a bit of inconsistency with the separation of the subject from its background.

Other camera features include Super Night Mode for low-light photography, which allows for multiple frames to be composed from a single click. The AI technology does the background work to lighten dark regions, and even applies “beautification effects” to enhance and optimize a subject’s skin, facial features, and even body shape. It also features AR Lens giving you different frames you can enjoy without any third party apps.

In terms of video, the Huawei’s AI Video Editor provides the user with a set of powerful tools for editing vlogs or video. It also utilizes facial recognition technology to help organize clips featuring a chosen subject. With a few taps of the finger, the user can create up to five montages each with a different subject from a single video.

A smarter and new UI design is possible through the HUAWEI nova 7i’s EMUI10. This UI makes everything read cleaner on the phone due to the “magazine layout” inspired by magazine typesetting. In addition to the palette of six Morandi colours inspired by renowned Italian painter Giorgio Morandi, these understated ashen tones are utilized in several aspects of the phone to generate an understated elegance and subtle readability to the UI. EMUI10 also optimally allocates system resources to intelligently accelerate chipset performance, providing a constant and responsive performance from the phone.

The Huawei nova 7i’s Kirin 810 chipset delivers powerful daily task performance. The high-speed 8GB RAM allows the Kirin 810 to perform powerfully and uninterrupted, whether the device is running apps, editing photos or videos, or playing triple-A mobile games. This high-end 7nm CPU consists of two big custom Cortex-A76 cores and six small Cortex-A55 cores. Compared to its predecessor’s Snapdragon 730, the Kirin 810 has 11% better single core performance and 13% higher multi-core performance. These cores work in lockstep with each other as the smart frequency technology adjusts clock speeds to make sure that apps are fed the proper-sized amount of processing power, resulting in better performance and efficiency.

The Kirin 810 is integrated with a custom Mali G52 GPU, making sure you are covered for all of your graphics processing needs. This is supplemented by Kirin Gaming+ Technology, which uses the hardware’s AI to improve the device’s gaming performance. In addition, Kirin 810 also includes Huawei’s fourth-generation ISP which gives the user 100% more powerful image processing capabilities. GPU Turbo enhances gaming performance and reduces battery consumption while gaming through EMUI10. It also greatly reduces frame jitter and provides better power efficiency. GPU Turbo also supports 85 mainstream games to be played on the Huawei nova 7i.

Gaming with the nova 7i ran smoothly. There weren’t any frame drops playing the fast racing video game, Asphalt 9, at its highest graphic setting. There weren’t any heating issues as well but the phone gets warmer after playing consistently for 2 hours. There are also a lot of other apps that you can easily download from Huawei’s AppGallery. This app distribution platform gives you an opportunity to earn gifts, rewards, and freebies when you download games and play it a specific level.

The large 4200mAh battery with its 40W Huawei SuperCharge support offers an even longer lasting battery life. This battery is supplemented by Huawei’s SuperCharge support, giving you only 1 hour to charge from 0 to 100. This fast charging technology is certified by TÜV Rheinland, offering you safe peace of mind as you charge.

The Huawei Nova 7i is really impressive with flagship specs at a very affordable price. It’s actually still the fastest phone at its price range despite having more phones launched and priced the same. It has an impressive camera and stellar battery performance.

The all-new, 2021 RS Q8, Audi Sport’s most dynamic model in the Q range of SUVs, is now on sale in Audi...
Read more
Features

The first Acer flagship store in the Philippines has finally opened its doors to consumers on January 15. It is the largest...
Read more
Automotive

This 2021, everyone is looking for that ray of positivity to regain composure and focus on what really matters. It is through...
Read more
Lifestyle

Carlo Peña
From sunny L.A. Diehard supporter of Liverpool Football Club and Lakers basketball. Other interests include street photography, streetwear, street tacos and clean energy tech (which also, happens to be on the street...)

The first Acer flagship store in the Philippines has finally opened its doors to consumers on January 15. It is the largest...
Read more
Features

The first Acer flagship store in the Philippines has finally opened its doors to consumers on January 15. It is the largest...
Read more

This 2021, everyone is looking for that ray of positivity to regain composure and focus on what really matters. It is through...
Read more