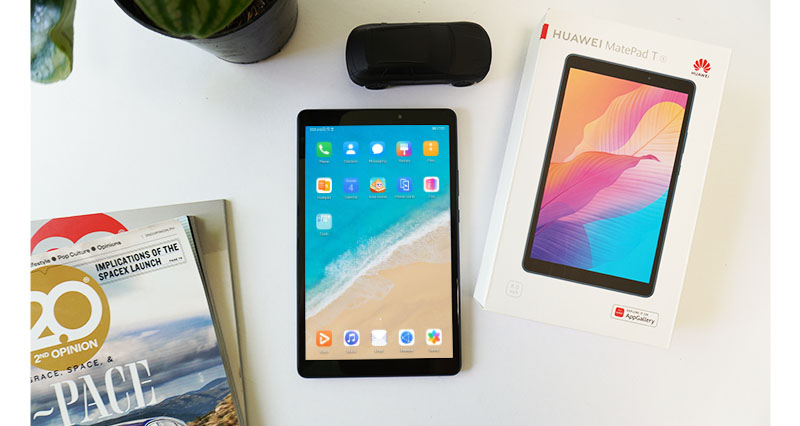 The MatePad T is the newest lightweight tablet with an 8” screen, and yet it’s easy to bring around with its compact size. Priced at P5,990, it comes with freebies worth PHP 3,968 when you order from June 8 until June 21.

Available in one color variant, the MatePad T comes with a navy blue finish or deep sea blue. It has a textured plastic border to make it less slippery and easier to grip. It has dimensions of 121.10mm x 199.70 x 8.55mm and weighs 310g with its built-in battery.

Up front, it features the 8” IPS panel with a 1280×800 resolution. On the right side of the tablet, it has the power button, volume rocker, and microphone. The microphone picks up noticeable background noise which can easily be heard when on a phone call. On the left, it has the card tray for the nano-SIM card and micro SD card. On the bottom, it only has the microUSB port, because the speaker and 3.5mm headphone jack are found on the top. The speakers were really loud but audio quality can be a bit muddy.

Its main camera has 5MP AF and supports HDR, panorama and beauty modes. While the front camera housed by the thick bezel on the top of the screen has 2MP resolution and can only use the beauty mode. Both cameras also feature a voice control mode by saying “cheese” or making “loud noises” to take photos. However, this feature has some inconsistency as the mic records a lot of noises, making it difficult to use the feature.

The quality of the pictures were satisfactory. Some photos appeared too grainy, and lacked color intensity (saturation) comparing the images from the real colors of the subject.

It runs on EMUI 10.1 with a Smart Collage feature that allows the user to put 2-9 pictures together straight from your Gallery. It has a MediaTek Helio P22 octa-core processor with up to 2.0GHz with the Cortex-A53 and the GPU PowerVR GE832 with up to 650MHz. Similar with the Y6p, it’s perfect for your day-to-day phone tasks.

It also has a Kid Center which is pre-installed where kids can record sound, take pictures, and draw. This app can automatically turn on blue light filter, give posture and bumpy road alerts, and eBook mode which changes the color of the screen. Parents can also control which apps a child can access. Like the rest of the new generation of Huawei smart mobile devices, the MatePad T also uses the company’s own suite of downloadable apps called AppGallery.

For games, there were some frame drops playing high-speed games at its highest graphic setting such as Asphalt 9 which is a car action racing game. Other games like Mobile Legends and Clash of Clans ran smoothly and there were no heating issues involved.

The MatePad T also has a 5,100mAh which surprisingly took about 4 hours and 30 minutes to fully charge from 0 to 100. It doesn’t support flash charging but the standard charge 5V/1A output.

Overall, the experience was not that bad for its price point. The camera could be better but the 5MP main camera and 2MP front camera can suffice. The graphics were good for watching movies, but not so much for gaming. It’s also very kid friendly with the Kids Corner app. What it lacks in power and speed compared to the Y6p, it makes up for in sheer screen size.