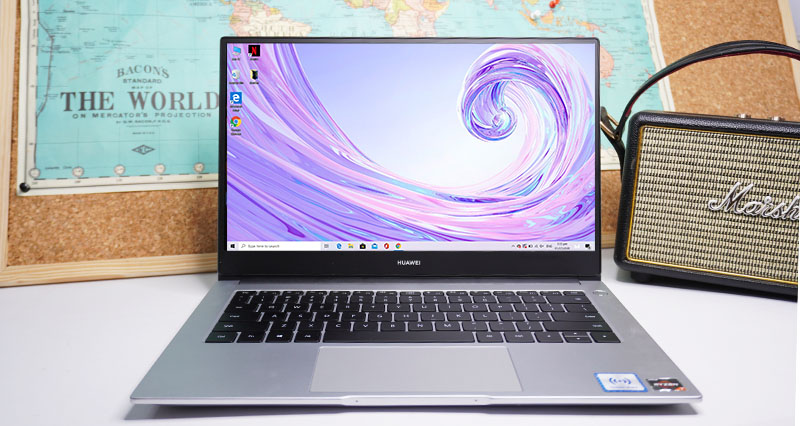 Huawei has been releasing products after products and they just recently launched their latest addition to the MateBook series—MateBook D14. This notebook is made lighter and thinner for students on the go but I doubt anyone would be on the go anytime soon; so this might help with distance learning or working from home.

This entry-level version of the MateBook series would fit everything you need to do for school, work, and entertainment. It comes in mystic silver and weighs 1.38 kg. It’s light but is not exactly the lightest. It has an aluminum alloy cover giving it a sleek look.

Underneath, it has the Huawei shark fin 2.0 to optimize air flow. It also has a noticeable rubber feet to help air flow and avoid blocking the speaker but it’s actually a bit too bulky. The speakers were loud but it wasn’t so impressive because the audio sounds muddy with poor high frequency sound reproduction and inadequate low frequency response. In layman’s terms you’re gonna miss that booming sound of your bass and high-pitched sound of the high notes of a piano or a flute.

On the sides you’ll find a USB-C port charger, USB3.0 and HDMI, while on the right, you have the USB2.0 and headset and microphone 2-in-1 jack. It sadly doesn’t have any microSD slot. It has a fingerprint power button to log in and it’s actually quite fast booting up.

Upfront we have a 14” IPS screen with a 1080×1920 resolution and an anti-glare protection which is really useful. It has thin bezels at the top and sides but it has thick bottom border. It’s got a TUV Rheinland-certified display that reduces blue light emission. It can also use a little boost of brightness because it’s only around 250 nits. The hinge can open up to a 178-degree viewing angle; although I have yet to figure out its purpose as it’s not a touchscreen.

The borderless experience is brought by the lack of camera on the top border because it’s recessed on the keyboard just like the other variants of the MateBook series. It will affect the viewing angle and it’s not very flattering as the user is seen looking down on the camera. When typing, the user’s fingers can occupy nearly half the screen. The 1MP camera’s colors were a bit dull. Although you can’t really expect so much from a laptop’s camera. The microphone can also use some work because it does not produce audio with high fidelity.

It has a 56Wh battery and, according to Huawei, it’s expected to last 9 and a half hours of local video playback; but for my daily routine, web surfing, watching videos, it lasted a total of 11 hours. It took me an hour and a half to fully charge. It also has a USB-C cord which can be used for other devices and this 65W plug with a retractable pin to make it less bulky. It would’ve been easier if it had the common plug like Apple’s Macbook because you might need a travel adaptor for this.

The Matebook D14 runs on Windows 10 Home and is powered by AMD Ryzen 5 with 8GB of RAM; but it is also available with the AMD Ryzen 7 which will costs a little bit more but might be worth it. It comes with a Radeon Vega 8 graphics card, and 512GB SSD storage. So far I didn’t experience any slow response with basic activities although when I tried it with Adobe Premiere Pro,  it took longer than usual to render about a minute long video.

It also features Multi-screen collaboration to be able to control your Huawei phone from you MateBook and easily drag and drop files—but it would only be compatible with a Kirin 980 chip or higher version.

Overall, with a price tag of PHP39,990, it offers serious value for money with its AMD midrange specs and it’s premium looking, too–a lot like Apple MacBooks but without compromising its affordable nature. It’s perfect for light notebook users who want a versatile device for school or office work.