Home Automotive Geely Azkarra: Making an impression in a sea of SUVs
AutomotiveFeaturedReviews

Geely Azkarra: Making an impression in a sea of SUVs 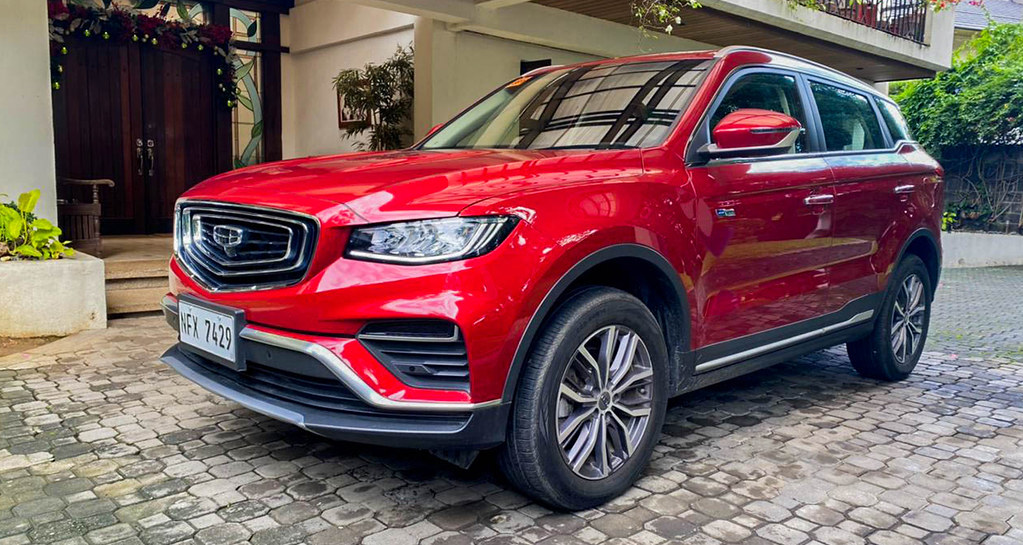 Geely’s premium SUV is the Azkarra, which is as exciting as it is intriguing. Its sharp, dynamic appearance is paired with contemporary features that, in totality, make the Azkarra quite enticing.

At first glance, you can already notice the Azkarra’s big and sturdy frame. The vehicle presents Geely’s familial grille design which, compared to its siblings, the Coolray and the Okavango, is larger, more pronounced and more impactful. There are muscular lines on the hood—visible from behind the wheel—that create a sense of power and impact.

Coming in five different colors—white, blue, silver, red and black—the Azkarra has automatic dynamic diamond LED headlamps. Blending with its powerful form, the Azkarra has a rear spoiler that gives off a sporty feel as well.

It possesses an artfully shaped electronic geartshift lever that needed some time for me to get used to as someone who isn’t familiar with that type of shifter. However, once I got the hang of it, I found the shifting between gears to be smoother, simpler and quicker.

The Azkarra is powered by a 48V Electric Motor Synergy battery and a 1.5L turbocharged gasoline engine that produces 190hp and 300Nm of torque and can go from 0 to 100km/h in a claimed 9.88 seconds. The engine, which was powerful yet silent, allowed for a smooth and pleasant drive all throughout. Even when stepping hard on the gas, there isn’t any jerkiness, while its brakes are also pleasantly responsive. Despite the vehicle being high off the ground, there wasn’t much swaying felt when turning corners quickly.

A knob is also present, located right below the gear stick, where you can shift between four different drive modes— comfort, eco, off-road and sport —to conveniently suit various situations and driving styles.

Its premium, caramel-colored Nappa leather seats give off both a premium feel and look. The Azkarra’s size makes it quite spacious and roomy, which is an excellent complement to its premium-feeling seats.

The Azkarra also features a very wide panoramic sunroof that’s great when you want to enjoy some fresh air. Personally, the only downside with such a large sunroof is that the number of rear A/C vents are compromised, as there are only two vents located behind the armrest.

Instead of the usual buttons and knobs that control the air conditioning and its different modes, the Azkarra’s buttons come in tactile piano keys that you flick either up or down. This type of setup was honestly intriguing at first, but has a modern and different feel than most other cars.

Similar to that of the two rows of seats, the trunk is spacious and is big enough to accommodate a sizable amount of cargo and luggage. I actually found its trunk to be even more spacious than that of similar vehicles, which is evident in how the Azkarra is slightly bigger and wider than its counterparts. Moreover, its smart electric tailgate automatically opens and closes with the push of a button, which is always a practical feature for anyone.

As stated earlier, the Azkarra is an enticing product with the many features it possesses that give off a contemporary and modern feel. One of its greatest features is its full-range 360º panoramic camera; its 4 HD wide-angle cameras are strategically positioned for optimum vision, while its front and rear cameras show a field of view of up to 90 meters each. The images are then shown very clear and detailed in 720p definition in the infotainment system. More than just being of extreme help and assistance while parking, I found the extensiveness of the all-around cameras to be just as helpful when moving around jam-packed roads and when passing through very tight streets, both of which are frequently experienced when driving in Metro Manila.

The feature that I liked most was its wireless charging platform located a layer below the gear stick, where I was able to enjoy the convenience of charging my iPhone or my AirPods without any hassle or worry whatsoever regarding wiring. The platform can only charge one device at a time, but there are multiple USB charging ports for both rows of seats if needed. The only hiccup I experienced with the wireless charging feature is that, occasionally, I needed to fiddle my device atop the platform to find its “sweet spot” in order for it to charge.

It has a very wide, 12.3-inch HD infotainment system that is fairly easy to use and possesses all the essential features. The screen’s width is greatly appreciated when utilizing the cameras as multiple angles are presented side-by-side, as if looking at various CCTVs from a screen at the security office.

Furthermore, the Azkarra has a 7-inch LCD instrument panel that is likewise easy to use. One small feature that I liked was that not only was it able to show me each of my tires’ pressures, but it notified me that my rear-left wheel lacked pressure and how off it was exactly.

The Azkarra also has an electronic parking brake and autohold which could be handy for stop-and-go traffic, of course depending on the driver’s preference. These, however, can simply be switched on or off with the press of a button just below the gear stick.

All in all, the Azkarra is an excellent car both in terms of the actual drive and the experience you have while inside it. To be completely honest, I wasn’t quite sure what to expect due to my personal unfamiliarity with the Azkarra and with Geely products in general. However, I was pleasantly surprised, to say the least. The Geely name and brand might not be the biggest or have the most hype (at least locally in the Philippines), but the Azkarra, especially at its price point, can definitely compete with the household name brands.