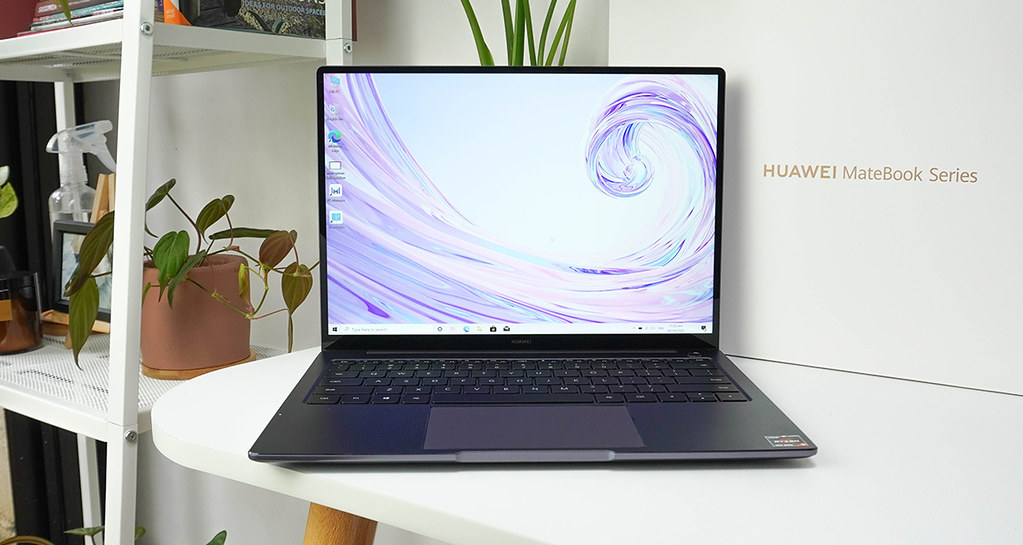 The Huawei Matebook 14 is the latest laptop offering from Huawei which packs a lot of punch in a slim, portable package. It weighs a light 1.49kg and is just 15.9mm thick, so it is easy to transport on-the-go wherever you need to be. Would this be your next mate for both school/work and gaming? Find out in our review.

The exterior itself is comprised of an elegant and sleek sandblasted space gray casing which sort of has a hint of blue. Contrasting cleanly with this space gray is a slim black bezel which features a centered brand logo on the bottom. It has a backlit keyboard with only two levels of brightness. It would’ve been better if it can be brighter. Below it, houses an embedded Huawei Share tag for simple Huawei Share activation.

The sides of the laptop contain two USB-A ports, a USB-C port, an HDMI port, and a 3.5mm headphone jack. It doesn’t have any SD card slot just like the MateBook D14. A fingerprint power button provides security and instant access to turn the laptop on, saving you time from having to type in a password.

The MateBook features an innovatively recessed camera within the keyboard, found between the F6 and F7 keys. It’s easily activated by simply pressing it, offering both ease-of-use and privacy. However, the lower angle doesn’t make it suitable for video calls because your fingers tend to occupy most of the screen when typing.

The MateBook 14 has a 2W dual-speaker system and stunning FullView Display with 2K resolution capability, delivers detailed and vivid picture quality with precise colors. The speakers were impressively loud without distorting the sound. There’s nothing really special with the vocals and lows, and it needs improvement with its high frequency. It has a giant 90% screen-to-body ratio, meaning you can get the most out of the screen with your apps and programs. The built-in Eye Comfort Mode is TÜV Rheinland-certified which means it filters excessive blue light. When this mode is activated it adjusts the screen to display softer colors and tones that are easier on the eyes to prevent fatigue from long-term usage.

An optional multi-touch feature turns the laptop’s display into a touchscreen which allows the owner to naturally control aspects of the UI especially when using Multi-screen Collaboration. This feature lets you seamlessly control activity on two Huawei devices such as a laptop and smartphone. For example, you can be editing photos on your phone and transferring that progress onto the Matebook’s larger screen for more detail. Other features include picture-in-picture, drag-and-drop file transferring, clipboard sharing, and hardware sharing (such as using your keyboard and mouse with the smartphone). A new feature allows you to answer audio and video calls from your phone through the Matebook.

The MateBook 14 packs a 56Wh battery to keep you going for a full workday – only if you work about 6 and a half hour a day. It comes with an ultra-portable 65W USB-C AC adapter that weighs just 160g. This pocket charger is even usable when charging your smartphone, and can deliver HUAWEI SuperCharge speeds for supported Huawei phones.

The MateBook 14 runs on Windows 10 Home. It also sports a 7nm AMD Ryzen 4000 H-series mobile processor with 8 cores and an AMD Radeon GPU made for gaming or more intensive tasks. The laptop is even capable of a power boost by pressing “Fn+P” on the keyboard, which activates performance mode and allows the processor to operate at 40W. To make this possible, the engineering of the Matebook’s high-density mini motherboard was done in such a way that it greatly dissipates heat with its dual Shark fin fans and heat pipe design. Six sensors scattered throughout the laptop monitor thermal activity and automatically provide ideal cooling for silent operation. In typical conditions the laptop runs at a quiet 25dB.

The Huawei MateBook 14 retails at P54,999 – a bit cheaper than the other models with the same specs. It’s commendable for its lightweight design, FullView Display, and respectable processor. It makes a better laptop for school or work rather than gaming.

You can now buy the Huawei MateBook 14 via all channels and Huawei stores. When you purchase the MateBook 14 from October 10 to 24, 2020, you will get first sale freebies worth PHP 11,998. This includes the Huawei Classic Backpack and Huawei FreeBuds 3i. You can also maximize the easy payment plans with all major bank credit cards – up to 24 months installments with 0% interest.

Previous articlePLDT Global takes lead in Carrier Collaboration, teams up with UK’s Capacity Media
Next articleGrab the first bite of the new Popeyes U.S. Spicy Chicken Sandwich ONLY on GrabFood this October 14!