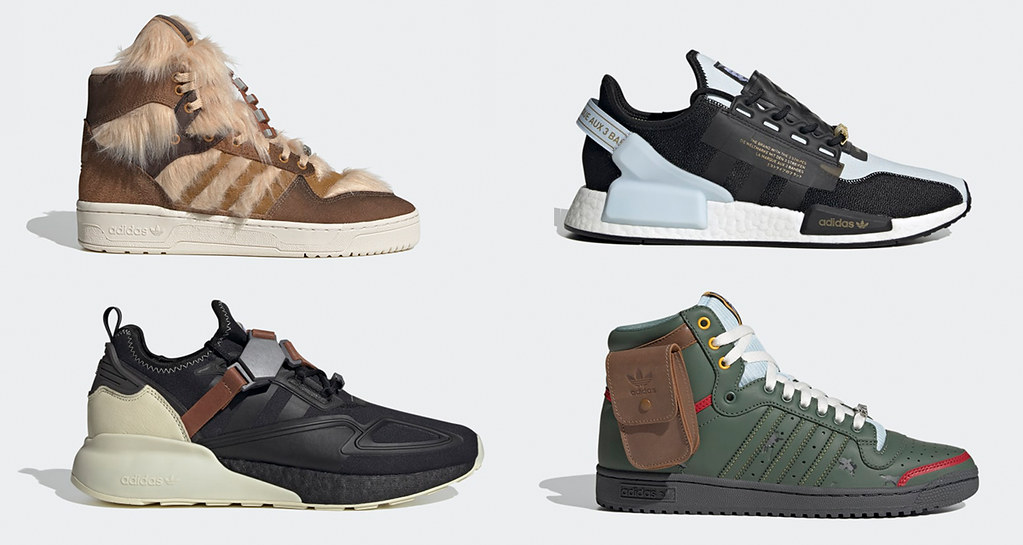 In celebration of Star Wars Episode V: The Empire Strikes Back’s 40th anniversary since its first screening back in 1980, Adidas has been releasing character-inspired sneakers throughout the entire year. The latest addition to the line up are four different shoes, ZX 2k Boost, NMD R1 V2, Rivalry Hi and Top Ten Hi, which serve as an ode to the popular and beloved characters Han Solo, Lando Calrissian, Chewbacca and Boba Fett, respectively. All of these shoes also come with special packaging and a special edition collector’s poster unique to each shoe and character.

The preceding releases celebrated more of the “main” figures in the film, such as the UltraBoost “Yoda” and “Princess Leia”, Superstar “Darth Vader”, NMD R1 “Stormtrooper”, Stan Smith “Luke Skywalker” and Top Ten “C-3PO”. Additionally, they previously released Star Wars-themed basketball sneakers for their signature NBA athletes Damian Lillard, James Harden, Derrick Rose and Donovan Mitchell. With the numerous Star Wars-edition sneaker releases by Adidas all throughout the year, it’s safe to say that The Three Stripes and Star Wars are all in in celebration of this special anniversary.

This version of the Adidas ZX 2k Boost reflects one of the more popular characters in the movie, Han Solo, the captain of the one and only Millennium Falcon. What’s immediately noticeable with this sneaker is the brown belt with a hexagonal steel buckle that wraps around the shoe’s upper, mimicking Solo’s belt with his holster and ammo attached to it. The rest of the shoe is two-toned with the main body colored black and the sole and heel colored beige, representing his black vest and beige undershirt.

Adidas took one of their currently more popular shoes in the NMD to represent the original owner of the Millennium Falcon and Han Solo’s old friend, Lando Calrissian. The predominantly black sneaker has light blue accents on its forefoot, tongue and back in representation of Lando’s cape. What I like most about this shoe is that it quotes one of his most iconic lines from the movie on the side of the shoe: “You know, that ship’s saved my life quite a few times. She’s the fastest hunk o’ junk in the galaxy.”

Probably the most eye-catching among the shoes on this list, this version of Adidas’ Rivalry Hi can’t be mistaken for any other character in the movie except for one of the most beloved and iconic in the entire series: Chewbacca.  This shoe features different shades of brown with long, light brown fur aptly coating majority of the shoe. Strapped across the shoe from top of the tongue down to the laces is a brown belt with grey details as an ode to Chewy’s ammo belt that he always has across his ginormous body. What once was a sneaker initially made for basketball and then eventually adopted by the skateboarding, punk, BMX and streetwear cultures, this rendition of the Adidas Rivalry Hi is perfect for any 7’5” furry gentle giant.

Rounding out this release is the Adidas Top Ten Hi dedicated to the feared bounty hunter Boba Fett. Mainly colored in olive green, its minimal design appropriately represents Boba Fett’s silent demeanor. Similar to the holes in his battle-tested armor, the Top Ten Hi likewise has mini holes on its forefoot. The shoe’s sockliner also depicts Boba Fett standing next to Lando Calrissian’s base, next to Darth Vader’s Troops. Similar to the NMD R1 of Lando, this sneaker also features iconic quotes from the movie, with Boba’s famous “You can run, but you’ll only die tired” line on the inside flap. Lastly, the messenger bag-like pouch that he keeps by his hip is also present on the side of the right sneaker to complete the entire get-up.

As compared to the aforementioned Star Wars-themed releases earlier in the year, this latest set of sneakers is definitely more bold and eye-catching, especially considering that the earlier shoes aren’t coated in Wookie fur. Moreover, I like how these shoes depict their respective characters by portraying more than mere colors and hues, but by adding twists to the existing shoe design by detailing certain characteristics and attributes that ultimately embody these characters and make them unique. Given Adidas’ previous Star Wars releases, it’s always great to see The Three Stripes celebrate those unsung heroes of the movie who may not have played the biggest roles, but were nonetheless just as integral to the movie and to the entirety of the Star Wars universe as well.

Shopee sets out to create impact, opportunities, and shared experiences, as part of its efforts to ensure that all consumers and businesses...
Read more
Automotive

It’s one of the smallest cars on the road but has as much torque as a pickup truck and hurtles you from...
Read more
Lifestyle

Adapting to the changes caused by COVID-19 pandemic, individuals, sectors, and even businesses have resorted to maximizing the internet. However, cyberattacks have...
Read more
Features