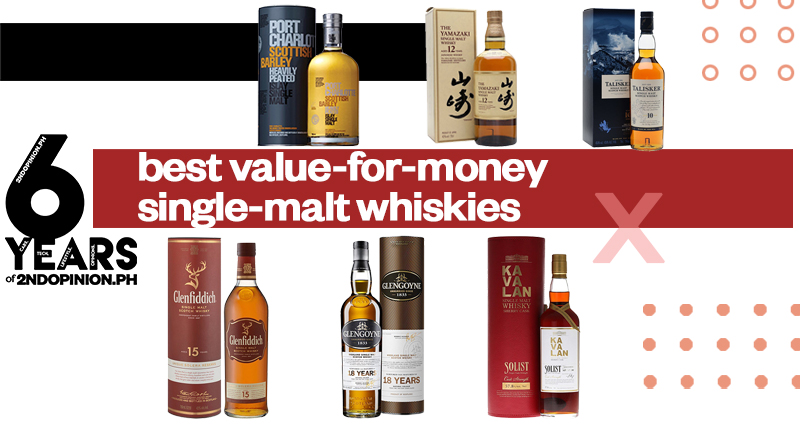 My dear friend and editor-in-chief of this publication asked me to come with a list of the six best single malt whiskies in celebration of 2ndopinion.ph’s sixth anniversary. I suggested that instead of coming up with the best, why not best in value? My past line of work as a second generation bar owner and circle of drinking buddies must have made him think I was qualified to make this list. Fortunately for me, a number of my drinking buddies have good taste so I guess I deserve a crack at it. As a caveat, I do hope you don’t take this list too seriously but I really do have fond memories of the whiskies on this list and look forward to making more in the future. I also told myself I will only choose the ones I have personally tried at least a few times and the price range should be below P10,000 a bottle and is available locally. So here goes.

This is my favorite drink whenever go to the Singapore Airlines Silver Kris Lounge in NAIA Terminal 3. It wasn’t because I feel like Pierce Brosnan’s James Bond character in “The World is not Enough” (1999) and “Die Another Day” (2002) where the Talisker 10 got its 15 minutes of fame. But I really liked this value-for-money single malt simply because it gives a classic, oily, smoky and spicy bouquet. My cigar-smoking days are long over but I could still see myself pairing a nicely rolled Cuban with this one. Part of the charm of this whisky is also the fact that it is the only distillery located on the fabled Isle of Skye and it is not as popular as the other whiskies. Even James Bond’s boss “M” seems to agree as she was likewise seen holding a glass in both movies.

My brother-in-law introduced me to this lovely single 18-year-old malt (whisky) but before I start to sound like a dirty old man, I do have fond memories of my first sip. The Glengoyne 18-year-old was introduced in 2012 and offers sherry-loving whisky drinkers something that will not burn a large hole in your pocket (just a small one). For this drink, I like to tease it with a splash of water to open it up. Some will say it’s sacrilege but who cares? It works for me. I remember asking David Cox, the director for fine and rare whiskies for the hugely popular Macallan Single Malt Whisky label if it was sacrilege not to drink your single malt whisky neat, he also said the same thing – whatever works.

Port Charlotte Distillery was founded in 1829 but closed in 1929. The distillery was located in the village of Port Charlotte on the island of Islay, off the west coast of Scotland, not far from its current owner (since 2003) Bruichladdich Distillery. This heavily peated whisky was crafted from the cask profiles originally selected by master distiller Jim McEwan. Currently sold out in the distillery but it is still locally available. Perhaps it will be the last chance for you to buy this heavyweight that’s been trickle distilled from 100% Scottish barley. I first tried this on one of the earliest occasions of the Whisky Live events held here in Manila and have grown fond of this label.

This is probably the least expensive one on the list. My first taste of this whisky was from a holiday gift from a drinking buddy of mine. Back then, any drink for me that starts with “Glen” must be worth trying. So I did. When I checked the price, I was instantly gratified and wanted to come back for more. This classic is one of the label’s bestsellers which the distillery says was attributed to the Glenfiddich Solera Vat system of whisky maturation. It is very easy to drink with hints of vanilla and dark fruits, a bit of honey and works well when drank neat or even with some ice. It wasn’t surprising to know that this whisky won several awards in international wines and spirits competitions.

When this label was still not popular outside Taiwan, I was able to try this beauty on a friend’s hole-in-wall café. My subsequent trips to Taiwan also gave me an excuse to bring home some but thankfully it is now within reach locally. It is a fairly young brand, only established in 2002 and it gained global recognition when its Solist Vinho Barrique won “World’s Best Single Malt Whisky” in 2015 at the World Whiskies Awards, gates swung wide open and demand just kept shooting up. Well, so much for Taiwan’s best kept secret.

The last one on the list does not mean it’s the least of my choices. As a matter of fact, it is the most expensive on my list. Aside from breaking the 10,000 peso mark (my bad) which I set myself when I made this list but the Yamazaki 12-year-old (IMHO) deserved to be on my list. It was the first Japanese single malt whisky I have tried and ironically, it was the only single malt whisky I have ever bought on a 7-11 Store in Japan, or anywhere else. I tried this for the first time some eight years ago and back then, it was less than P2,000 a bottle if I recall correctly. That said, I would have chosen the Hibiki 17-year-old which is my all-time favorite but unfortunately, it is a blended whisky and it is also out of production which made this whisky outrageously expensive these days.

All these single malt whiskies can be ordered online at www.singlemalt.ph but be sure you have a liquor ban-free delivery address, no thanks to GCQ.

Shopee sets out to create impact, opportunities, and shared experiences, as part of its efforts to ensure that all consumers and businesses...
Read more
Automotive

It’s one of the smallest cars on the road but has as much torque as a pickup truck and hurtles you from...
Read more
Lifestyle

Adapting to the changes caused by COVID-19 pandemic, individuals, sectors, and even businesses have resorted to maximizing the internet. However, cyberattacks have...
Read more
Features