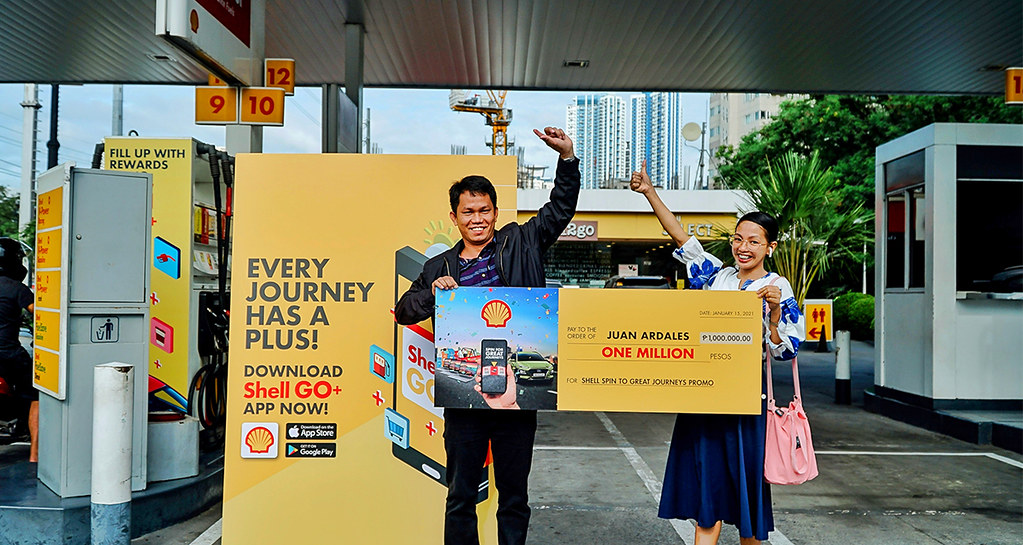 One’s situation can shift from hardship to happiness and hope in just a few minutes. In the case of Juan Ardales, the winner of Shell’s Spin for Great Journeys, it came with the good news he heard over a phone call which he almost did not pick up. The Shell representative at the other end of the line told him that he had just won P1 million pesos. To say the least, it was a great way for him to start 2021.

Like millions of his fellow Filipinos, 2020 was a rough year for Juan Ardales.  He got hit hard by the pandemic, especially since he was in the real estate business, working as a freelance broker. Amid all the uncertainties faced by the market, Ardales wasn’t just losing prospecting buyers, he wasn’t getting any at all.

Recovering from the setbacks he experienced was quite the challenge, especially since he has a wife and two kids to feed. But this was exactly what pushed him to try his luck at the Shell Spin for Great Journeys raffle promo. While doubtful he’d win anything, seeing the grand prizes gave him hope for a better future, and a chance for his family to start again.

He actually almost missed his golden call as he initially didn’t answer his phone when the Pilipinas Shell team reached out to him. However, he eventually picked up the phone and was informed of his P1 Million cash prize.

Looking back, he is very thankful to Shell, especially to the station where he made his winning purchase– at Shell C5 Heritage. “Actually, yung Shell gas station na ‘yon, ever since nag-open sila, regular talaga akong nagpapagas doon He plans to use his cash prize to pay his living expenses, while the rest will be put to investments and opening own real-estate business this 2021. .

Shell has always advocated for helping Filipino communities, and this promo aims to assist the Filipinos who were affected by the pandemic.

Shell’s ‘Spin for Great Journeys’ raffle promo is ongoing until January 31, 2021. For a minimum single receipt spend of at least P500 on Shell fuels, P250 on Shell lubricants, or P250 on Shell SELECT products from participating Shell stations, customers will get to spin a digital wheel.

Staying true to its commitment to creating innovative products that will take you further, Maxxis PH introduced to the Philippine market 10...
Read more
Automotive

The latest Lamborghini to be announced, with deliveries starting later in 2021, is the Huracán STO (Super Trofeo Omologata), a road-homologated super...
Read more
Automotive

Isuzu Philippines Corporation (IPC) revealed its much-awaited all-new D-MAX to the Philippine motoring media via Zoom this morning, then followed that up...
Read more